Symphony Hall is a 2,262 seat concert venue in Birmingham, England. It was officially opened by the Queen in June 1991, although had been opened on April 15, 1991. It is home to the City of Birmingham Symphony Orchestra and hosts around 270 events a year. It was completed at a cost of £30 million. The hall's interior is modelled upon the Musikverein in Vienna and the Concertgebouw in Amsterdam. The venue, managed alongside Town Hall, presents a programme of jazz, world, folk, rock, pop and classical concerts, organ recitals, spoken word, dance, comedy, educational and community performances, and is also used for conferences and business events as part of the International Convention Centre. 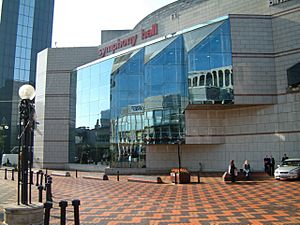 Symphony Hall, widely considered one of the finest in the world, was designed by Percy Thomas Partnership and Renton Howard Wood Levin, (who together formed the Convention Centre Partnership for the ICC) with specialist help from Russell Johnson of Artec Consultants Inc.. A particularly innovative feature is the hall's acoustic flexibility. It has a reverberation chamber behind the stage and extending high along the sides, adding 50% to the hall's volume, the doors to which can be remotely opened or closed. The U-shaped reverberation chamber area has a volume of 12,700 cubic metres (450,000 cu ft). There is an acoustic canopy which can be raised or lowered above the stage. Dampening panels can be extended or retracted to ensure that the 'sound' of the space is perfectly matched to the scale and style of the music to be performed. There are also reverse fan walls at the rear of the hall which provide further reflections of sound. All the walls and the ceiling are 200 millimetres (8 in) thick and are made of concrete.

The hall is built only 30 metres (100 ft) from a covered railway line. To prevent the transmission of vibrations, the hall is mounted on rubber cushions, as is the railway track. The hall is also shielded from heavy traffic on Broad Street by double skins of concrete. Large, low-speed air ducting cuts the ventilation noise.

In 2001, a 6000-pipe symphony organ was installed, designed and built by Johannes Klais Orgelbau in Bonn and specially tailored to the hall's reverberation chambers. This is now the largest mechanical action organ in the UK.

Through its management company Performances Birmingham Limited, Symphony Hall alongside Town Hall has charitable status and through an Education/Community department carries out a number of projects for schools, community groups and families, working with around 12,000 young people and 6,000 adults each year.

All content from Kiddle encyclopedia articles (including the article images and facts) can be freely used under Attribution-ShareAlike license, unless stated otherwise. Cite this article:
Symphony Hall, Birmingham Facts for Kids. Kiddle Encyclopedia.