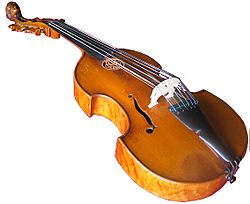 The viola d'amore is a string instrument which was popular in the 17th and 18th century. It is a kind of viola. The name is Italian and means “viola of love”. It can have 6 or 7 strings. It is held under the chin and bowed like a violin. Sometimes it is used today to play music from the 17th and 18th centuries. Occasionally some modern composers have also written music for it.

The viola d'amore is about the same size as a modern viola. However, the shape is more like the shape of a viol. Like viols, it has a flat back, a wide rib (the sides), sloping shoulders and a carved head at the top of the peg box. It does not have any frets (markings on the fingerboard) like a viol or a guitar. The sound-holes are often in the shape of a flaming sword.

The viola d'amore usually has six or seven playing strings which are played with the bow, just as with a violin. In addition, it has the same number of sympathetic strings. These are strings which vibrate when the other strings are played, making the sound richer and sweeter.

The notes it can play

The viola d'amore was often tuned to whatever notes were best for the piece it was to going to play. This is a kind of scordatura (changing the way the strings are tuned). Towards the end of the 18th century the usual tuning became: A, d, a, d', f#', a', d'' (see music example. Notice the example uses the "viola clef") 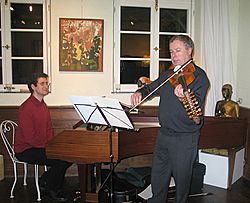 A viola d'amore being played, accompanied by a harpsichord.

The viola d'amore can regularly be heard today in groups who play Baroque music on period instruments. It can be heard, for example in Bach’s St John Passion.

All content from Kiddle encyclopedia articles (including the article images and facts) can be freely used under Attribution-ShareAlike license, unless stated otherwise. Cite this article:
Viola d'amore Facts for Kids. Kiddle Encyclopedia.