Spa is a municipality of Belgium. It is in the Walloon Region and Province of Liège. It is in a valley in the Ardennes mountain chain. Spa is 35 km (22 miles) southeast of Liège, and 45 km (28 miles) southwest of Aachen. 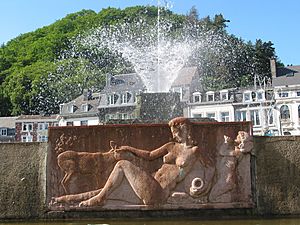 Spa is famious as a location of healing hot springs. It was a frequent watering-place since the 14th century.

In 1918, the German Army established its main Headquarters in Spa. German delegates went to the French lines to meet Marshal Foch. This led to the Armistice which ended the First World War.

The town is perhaps best known today as home to the Circuit de Spa-Francorchamps, the host the annual Formula One Belgian Grand Prix. It is also the location of mineral water producer Spa.

All content from Kiddle encyclopedia articles (including the article images and facts) can be freely used under Attribution-ShareAlike license, unless stated otherwise. Cite this article:
Spa, Belgium Facts for Kids. Kiddle Encyclopedia.