The title of this article contains the character ö. Where it is unavailable or not wanted, the name may be written as Bad Toelz. 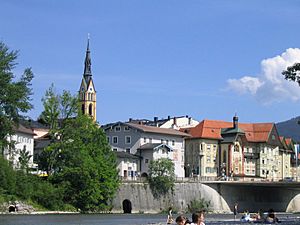 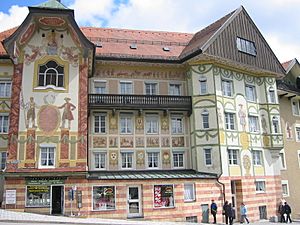 Bad Tölz is a town in Bavaria, Germany, and capital of the district of Bad Tölz-Wolfratshausen.

In 1937 a SS-Junkerschule (SS Officer Candidate School) was made at Bad Tölz which operated until the end of World War II in 1945. As well, a subcamp of the Dachau concentration camp was located in the town. It provided labour for the SS-Junkerschule and the Zentralbauleitung (Central Administration Building). The former SS-Junkerschule was the base of the U.S. Army's 1st Battalion, 10th Special Forces Group until 1991.

Bad Tölz is known for its spas, historic medieval town, and spectacular views of the alps. On the western bank of the Isar River lies the Kurverwaltung, or modern spa, whose iodine-rich waters are known for their soothing and healing powers. Another major attraction is Stadtpfarrkirche, a church made in 1466, which is a good example of German late-Gothic architecture.

All content from Kiddle encyclopedia articles (including the article images and facts) can be freely used under Attribution-ShareAlike license, unless stated otherwise. Cite this article:
Bad Tölz Facts for Kids. Kiddle Encyclopedia.