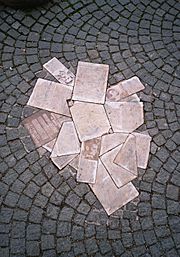 Monument to the "Weiße Rose" in front of the Ludwig-Maximilian-University, Munich

The White Rose was a German group that opposed the Nazis in World War II. From June 1942 until February 1943 they distributed pamphlets denouncing Adolf Hitler's regime which was based on the idea that some races were better than others. The Nazis thought the "Aryan race" (pure Germans) were the best race of all, and that they deserved power and respect, the "inferior" races - the Jews, Roma people, Slavs, and blacks - were classified as Untermenschen (sub-humans). The Nazis sent millions of Jews, Roma and other people to concentration camps and death camps, where they were killed. These killings are now called the Holocaust.

The White Rose group consisted of students from the University of Munich along with a professor.

The members of the White Rose were caught due to an informant in 1943. They were then executed by the Nazi government. However, the Allied powers acquired one of their pamphlets. The pamphlet was copied and dropped over Germany by bombers, spreading the message of resistance. After World War II, Germany looked back on the White Rose as heroes who saw the crimes of the Nazis better than most.

All content from Kiddle encyclopedia articles (including the article images and facts) can be freely used under Attribution-ShareAlike license, unless stated otherwise. Cite this article:
White Rose Facts for Kids. Kiddle Encyclopedia.