Vichy (Occitan: Vichèi) is a commune in central France, in the Auvergne-Rhône-Alpes region, along the Allier river. It is the commune in the department with second largest population after Montluçon. It is in the historic province of Bourbonnais.

Vichy has lots of Spas and resorts. This site was inhabited before the Roman conquest of Gaul.

During World War II, it was the capital city of Vichy France.

The distances from Vichy to other cities are:

The Köppen climate classification type for the climate at Vichy is an "Oceanic climate" (also known as Maritime Temperate climate) and of the subtype "Cfb".

The inhabitants of Vichy are known, in French, as Vichyssois (women: Vichyssoises).

With a population of 25,279, Vichy is the second largest city of the Allier department. It has a population density of 4,321 inhabitants/km2.

Evolution of the population in Vichy 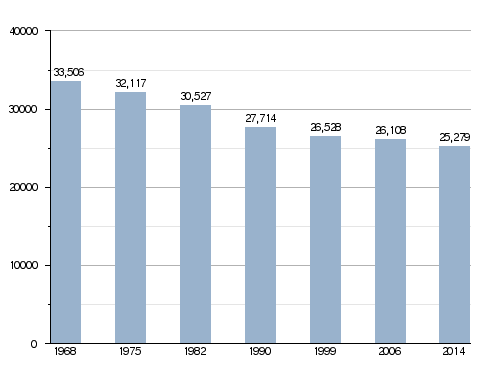 Vichy is a subprefecture of the Allier department since 1941; before that year, the subprefecture was in Lapalisse. It is also the capital of the arrondissement of Vichy and the administrative centre (French: chef-lieu) of two cantons:

It is part of the intercommunality Vichy Communauté.

Vichy is twinned with:

All content from Kiddle encyclopedia articles (including the article images and facts) can be freely used under Attribution-ShareAlike license, unless stated otherwise. Cite this article:
Vichy Facts for Kids. Kiddle Encyclopedia.