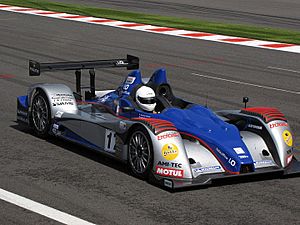 A race track is special place built for racing. The racing may be for people, animals, or vehicles. Examples of animal racing are horse racing. Examples of vehicle racing are automobiles and motorcycles. A race track may have seats for the spectators to watch the race.

Other name for race tracks are race course, speedway, and circuit.

Often race tracks are the place where people will bet on animals and vehicles to win.

Modern racetracks are designed with safety as the first priority. This is very important for race tracks used in auto racing. Safety foe the spectator, track workers, and racers. Fences are often used to protect the spectators from the race track. Barriers, sometimes padded, are used to stop race cars if they run off the track.

Most race tracks are a closed loop. The start and finish line is at the same place. Some tracks are open. They start at one point and end at a different location.

Some race track are in the general form of a circle or oval. Michigan International Speedway is an example of an oval track. The racers always turn in the same direction. In the United States, they normally turn left. NASCAR runs most of its races on oval tracks. 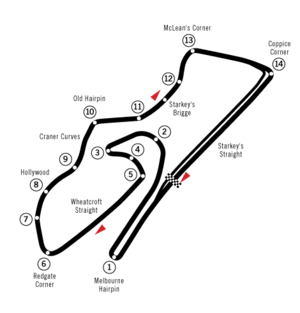 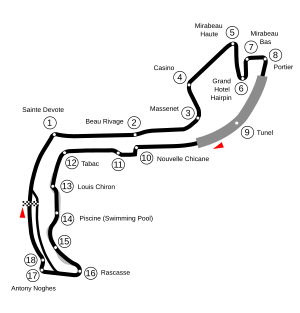 Some races tracks are temparary street courses. Regular public roads are temporally closed, and the race couse it set-up using the closed roads. One of the most famous street course is Circuit de Monaco. Every year, the Formula One Monaco Grand Prix is held on this course. These types of tracks are usually called circuits.

All content from Kiddle encyclopedia articles (including the article images and facts) can be freely used under Attribution-ShareAlike license, unless stated otherwise. Cite this article:
Race track Facts for Kids. Kiddle Encyclopedia.