The Monaco Grand Prix (French: Grand Prix de Monaco) is a Formula One motor race held each year on the Circuit de Monaco. Run since 1929, it is widely considered to be one of the most important and prestigious automobile races in the world and, with the Indianapolis 500 and the 24 Hours of Le Mans, forms the Triple Crown of Motorsport. The circuit has been called "an exceptional location of glamour and prestige".

The race is held on a narrow course laid out in the streets of Monaco, with many elevation changes and tight corners as well as a tunnel, making it one of the most demanding tracks in Formula One. In spite of the relatively low average speeds, the Monaco circuit is a dangerous place to race and often involves the intervention of a safety car. Thus, it is the only Grand Prix that does not adhere to the FIA's mandated 305-kilometre (190-mile) minimum race distance for F1 races.

The Monaco Grand Prix was part of the pre-Second World War European Championship and was included in the first World Championship of Drivers in 1950. It was designated the European Grand Prix two times, 1955 and 1963, when this title was an honorary designation given each year to one Grand Prix race in Europe. Graham Hill was known as "Mr. Monaco" due to his five Monaco wins in the 1960s. Brazil's Ayrton Senna won the race more times than any other driver, with six victories, winning five races consecutively between 1989 and 1993.

In 2018, Lewis Hamilton and Fernando Alonso criticised Monaco GP as the "most boring race" due to limited opportunities of overtaking during the Grand Prix.

Drivers in bold are competing in the Formula One championship in the current season. 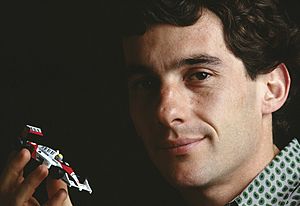 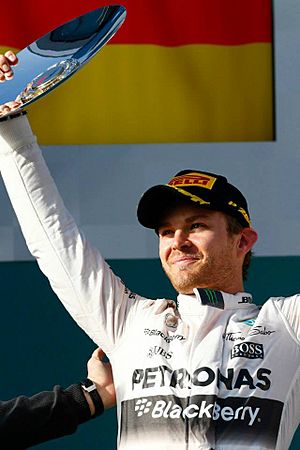 Nico Rosberg won the Monaco Grand Prix three times in a row from 2013 to 2015, racing for Mercedes.

All content from Kiddle encyclopedia articles (including the article images and facts) can be freely used under Attribution-ShareAlike license, unless stated otherwise. Cite this article:
Monaco Grand Prix Facts for Kids. Kiddle Encyclopedia.