Jarno Trulli (born 13 July 1974) is an Italian racing driver. He competed in Formula One from 1997 to 2011, driving for Minardi, Prost, Jordan, Renault, Toyota, Lotus Racing and Team Lotus. His best result in the World Drivers' Championship was sixth place in 2004; this was also the year in which he scored the only win of his Formula One career at the 2004 Monaco Grand Prix.

Throughout his Formula One career, Trulli was renowned for his skill in qualifying, regularly achieving far better grid positions than rivals with superior cars to his own. He was also known for his defensive driving style which allowed him to successfully hold off quicker drivers, sometimes for an entire race. The combination of being able to achieve high grid positions in comparatively slow cars and his ability to hold off faster drivers would often result in a line of vehicles forming behind him during a race, which was commonly referred to as the 'Trulli Train' by commentators, fans and journalists.

Trulli was slated to compete in the 2012 Formula One season, but retired before the season began. In 2014–15 he competed in the inaugural season of the FIA Formula E Championship, driving for Trulli GP, a team he founded himself. 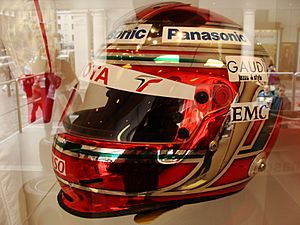 Trulli's helmet from the 2009 season

His parents were motorsport fans and named their son after Jarno Saarinen, the Finnish Grand Prix motorcycle racing champion who was killed at Monza in 1973. He started racing in karts at an early age; after winning the Karting World Championship in 1991, the Italian and several karting championships in different categories up to 1995, Trulli won the German Formula Three Championship in 1996.

In 1997, Trulli made his debut in Formula One with Minardi. After 7 races he replaced the injured Olivier Panis at Prost and impressed immediately. He stayed at the Prost team for the next two seasons and eventually scored his first podium in wet conditions at the 1999 European Grand Prix. 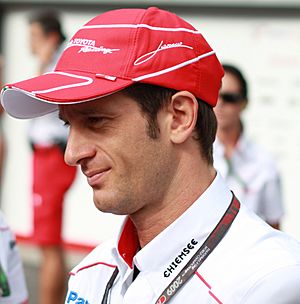 All content from Kiddle encyclopedia articles (including the article images and facts) can be freely used under Attribution-ShareAlike license, unless stated otherwise. Cite this article:
Jarno Trulli Facts for Kids. Kiddle Encyclopedia.