Minardi was an automobile racing team and constructor. It was founded in 1979 by Giancarlo Minardi. It competed in the Formula One World Championship from 1985 until 2005. The team was headquartered in Faenza, Italy. They had little success, but acquiring a loyal group of fans. In 2001 the team was nearly out of money, and was about to shut down. To save the team Mr. Minardi sold it to Australian businessman Paul Stoddart. Stoddart ran the team for five years. Then Stoddart sold the team to the energy drink company Red Bull in 2005. Red Bull renamed the team Scuderia Toro Rosso.

During its time in F1, the team scored a total of 38 championship points. 16 earned by the team's first driver, Pierluigi Martini. Martini also recorded the team's only front row start, 2nd at the 1990 United States Grand Prix. Martini led a lap in the 1989 Portuguese Grand Prix. The team never achieved a podium (top 3) finish. The best finishing position they managed was 4th place. Martini finished 4th twice in 1991 and Christian Fittipaldi in 1993.

Before Minardi's demise, it was a well-liked team within Formula One circles. In the paddock, the team was known for it friendliness, accessibility, and lack of corporate culture. On the track, their cars were considered by many as well-designed for their tiny budget. They never had the money to spend compared to front-runners such as Ferrari and McLaren. Their low running position was a result of a lack of funds and engine power, rather than a poor car. They also resisted employing pay drivers more than most other teams short on money. Pay drivers are drivers who pay the team to drive the race car. Most professional race drivers are paid by a team to drive. Minardi produced an impressive list of former drivers. Two-time World Champion Fernando Alonso drove for them in 2001. Former Minardi drivers who have gone on to win Grands Prix include Alessandro Nannini, Giancarlo Fisichella, Jarno Trulli and Mark Webber. Alex Zanardi, who drove as a substitute driver for Minardi in 1992, went on to win two Champ Car titles. Justin Wilson and Christian Fittipaldi have also won races in premier North American open-wheel competition.

The Minardi family has a longstanding involvement in motorsport. The family has run a Fiat dealership since 1927. Giovanni Minardi competed in his own cars in the late 1940s. After his death, his son Giancarlo took over the racing part of the family business. He ran customer cars in Formula Two under various names from 1972 to 1979. Giancarlo briefly ran a customer Formula One Ferrari as Scuderia Everest in 1976. In 1979, he gaining financial backing Piero Mancini. Mancini was a well known Italian motor racing patron (supporter). This backing allowed Giancarlo to set up the Minardi racing team as a constructor.

The Minardi team first competed under that name in the 1980 European Formula Two championship. The team commissioned a BMW powered design from Giacomo Caliri's FLY studios. Caliri had earler build Fittipaldi Automotive team's F5A Formula One car. The Minardi team had four moderately successful Formula Two seasons with a variety of young drivers, including Alessandro Nannini and Johnny Cecotto. The team's most best result was a 1981 win at the Misano Circuit by Michele Alboreto. Minardi left the Formula Two division at the end of 1984. In 1986 a modified version of their final Formula Two car was entered in two rounds of the Formula 3000 championship. Formula 3000 had replaced Formula Two in 1985 Minardi did not have any success in Formula 3000. 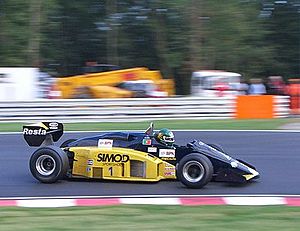 During 1984, Minardi made the decision to enter Formula One the next year. Caliri designed the team's prototype Formula One car. The car was intended to be used for both Formula One and the new Formula 3000 series. The car was designed to use the Alfa Romeo's V8 turbocharged engine. When engineer Carlo Chiti left Alfa Romeo, he founded Motori Moderni. Minardi became the only customer for Chiti's new V6 engine design. The engine was not ready for the start of the 1985, so the team converted their chassis, the M185. They used a Cosworth DFV V8 engine for the first two races. The single car team was unsuccessful in its first year. They did not score any points. The new engine was underpowered. Driver Pierluigi Martini finished only two races. Martini's best was 8th place.

The team expanded to two cars for the 1986 season. They had little success competing with the Motori Moderni engine. In 1988 they started using the Cosworth engines. The team became more competitive. By 1989 had become top entrant for tyre maker Pirelli's return to Formula One. The team were moderately successful in the middle of the field through the late 1980s and early 1990s. Minardi gave a number of Italian drivers their first chance at the top level, including Alessandro Nannini, Pierluigi Martini and Gianni Morbidelli. Martini in especially tied with Minardi, driving for them three different times. He drove for them on their debut in 1985. Scored their first point in the 1988 United States Grand Prix. Took their only front-row start at 1990 USA Grand Prix, aided by special Pirelli tyres. Led their only lap in the 1989 Portuguese Grand Prix. Martini was one of the drivers that scored Minardi F1 result of 4th place.

Pierluigi Martini driving for Minardi at the 1995 British Grand Prix.

Through the mid-1990s the team was at the beginning of the end of the Italian Formula One constructors. It was the first team in modern times to make use of customer engines. They used Ferrari engines in 1991. In 1992they switched to Lamborghini V12 engines. In 1993 they went to Ford engines. As the number of small teams shrank, Minardi slipped from the mid-field towards the back of the pack. The team was short on money. In 1994 Minardi joined his team with BMS Scuderia Italia in an effort to survive. The Minardi team was then controlled by Flavio Briatore.

Gabriele Rumi was an Italian businessman and the former owner of the Fondmetal Formula One team. Rumi had been sponsoring Tyrrell. In 1996 Rumi switched his sponsorship support to Minardi. He became more interested in the team, and became the co-owner and chairman. For the 2000 season the team were forced to use 1998 specification Ford Zetec-R V10 engines, which were renamed as Fondmetal engines. Rumi had contracted cancer, and was forced to withdraw his backing in 2000. The team scored very few points in this era. Only seven points were scored, four of them by Martini. Michele Alboreto scored his last point in Formula One with a sixth place in the 1994 Monaco Grand Prix. Pedro Lamy scored his one and only point in Formula One with a sixth place in the 1995 Australian Grand Prix.

The team, near financial collapse, was purchased by Australian businessman Paul Stoddart in early 2001. Stoddaart merged the team with his European Racing Formula 3000 team. During its final years, the Minardi team was almost as famous for its politics as its racing. Stoddart was described as the Formula One teams' unofficial representative. Stoddart tried to get the costs for the teams reduced. He asked to the other car manufacturers for help. He wanted an agreement where the independent teams in Formula One would get cheaper engine deals. In return, the teams that benefited from this deal would support the factory teams with the FIA. This would help the factory teams oppose new rule changes, such as the proposed ban on traction control.

Before the start of the 2004 season, Stoddart threatened to support the ban on traction control. Later he withdrew this threat. Before the 2005 Australian Grand Prix Stoddart threatened to withdraw his cars. There were new regulation in place for 2005. He claimed that Minardi could not afford to modify their cars. Once again Stoddart ended up withdrawing his threat. Several times, Stoddart called for the resignation of Max Mosley, the FIA's President.

One of Minardi's most famous performances came at the 2002 Australian Grand Prix. It was Australian driver Mark Webber's first Formula One race. At his and Stoddart's home grand prix, Webber brought the car home in fifth place finish. He scored two World Championship points, a rare occurrence for Minardi. 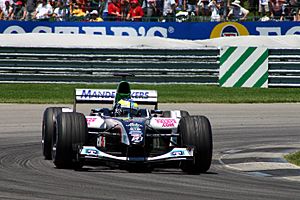 Minardi was represented in 2004 by two rookies, Italian Gianmaria "Gimmi" Bruni and Hungarian Zsolt Baumgartner. During the year, they celebrated their 20th season in F1. Baumgartner scored Minardi's first point in more than two years at the United States Grand Prix. Only eight cars finished the USGP, and Baumgartner finished 8th. Baumgartner was also the first Hungarian to score a point in a World Championship F1 race. 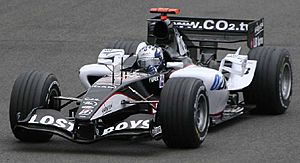 Patrick Friesacher at Silverstone, driving the Minardi PS05, the last Minardi chassis to be produced.

In 2005, Minardi's drivers were Christijan Albers and Patrick Friesacher. They scored a total of 7 points, the most since the 1993 season. All of the points came from the debacle of the United States Grand Prix. They finished fifth and sixth. Only six cars started the race. None of the cars running Michelins started the race because of tyre problems. After Friesacher sponsors stopped paying him before the German Grand Prix, he was replaced by the Jordan test driver, Robert Doornbos. This created the first ever all-Dutch driver line-up in Formula One history. 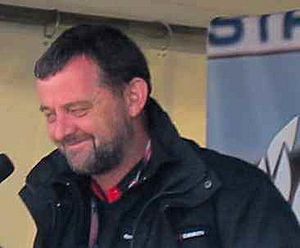 Paul Stoddart stated that he would sell Minardi if he could find the right buyer. Stoddart said he had 41 offers to buy the team. His conditions for a sale was the ability of a buyer to move the team forward and leave the team based in Faenza. The drinks manufacturer Red Bull already owned one Formula One team, Red Bull Racing. They decided to set up a second team. They would promote American drivers through its young driver program, the Red Bull Driver Search.

On 10 September 2005 Red Bull announced it would take control of Minardi in November and run it as their "rookie team" from 2006.

Minardi fans worldwide immediately started an online petition to save the Minardi team name and the team's 20-year heritage. The petition was not successful and the team was renamed Scuderia Toro Rosso for the 2006 season. The team's funding from Red Bull was increased. They started using the Red Bull chassis and Ferrari engines. Their results improved, and Toro Rosso scored their first win at the 2008 Italian Grand Prix.

Giancarlo Minardi and Paul Stoddart have both made use of the Minardi name in new motorsport ventures.

On 1 January 2006, Giancarlo Minardi re-acquired some rights to use the Minardi name in racing. He announced that he was licensing the Minardi name to an existing team GP Racing in the junior Euro Formula 3000 series, to be entitled 'Minardi Team by GP Racing'. The team raced with moderate success, scoring a podium in each leg of the Spa round in June 2006. For 2007, Minardi Team by GP Racing combined forces with GP2 team Piquet Sports, to form Minardi Piquet Sports. For 2008 the team is known simply as Piquet Sports.

In 2006, Paul Stoddart declared his intention to enter a new team called 'European Minardi F1 Team Ltd' into Formula One beginning in 2008. His application was unsuccessful, with the 12th place on the grid being awarded to Prodrive. Prodrive was unsuccessful in launching their F1 team. Stoddart turned his attentions to the U.S. based Champ Car series. On 18 December 2006, it was confirmed that he had purchased a controlling interest in the CTE Racing-HVM Champ Car team. The team would be renamed Minardi Team USA. In 2007, the team had some success. Robert Doornbos won two times and had several podium finishes. He finished third in the series, and won Rookie of the Year honors. The Champ Car series folded before the 2008 season. Stoddart's team entering the IndyCar Series under the HVM name.

Stoddart retains the right to use the Minardi name for a British-registered company.

All content from Kiddle encyclopedia articles (including the article images and facts) can be freely used under Attribution-ShareAlike license, unless stated otherwise. Cite this article:
Minardi Facts for Kids. Kiddle Encyclopedia.