Lamborghini was founded in 1963 by Ferruccio Lamborghini. He built tractors after the Second World War. He founded Lamborghini because he wanted to build sports cars to compete against Ferraris.

In 1963, he released a first prototype of his ideal sports car, the 350 GTV. The next annum, Lamborghini started with the production of their first car for sale, the 350 GT. 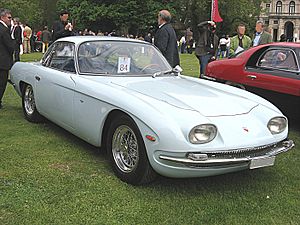 The 350 GT was the first production car produced by Lamborghini. It was produced from 1964 until 1967. It is a two-door coupé with two seats. It has a V12 engine in the front of the car. The engine produced 206 kW.

The Miura was the third car made by Lamborghini. It was powered by a mid-engine V12, making it one of the fastest cars of its time. It also had a top speed of 295 km/h.

The Countach is one of the most famous Lamborghinis. It was also the one which was built for the longest time, 16 years, from 1974 to 1990. There were several different versions. They all had V12 engines with the power output ranging from 260 to 355 kW.

The Diablo was named after the famous fighting bull. It was the last car made by Lamborghini before Audi’s ownership.

The Murciélago was the first car made under ownership by Audi. It was built from 2001 to 2010. It had a V12 engine which produced between 426 and 493 kW. The Lamborghini Reventón is a special edition of this car.

The Gallardo was first seen at the 2003 Geneva Motorshow. It was a competitor for the Ferrari F430. It was an entry-level model for Lamborghini. It had a V10 engine from Audi which offered between 368 and 419 kW. During its production time from 2003 until 2018, there were several special editions, including a version for the Italian Police. 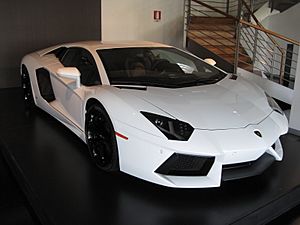 The Lamborghini Veneno was a limited production sports car. It cost $4,500,000, making it one of the most expensive cars manufactured.

The engine is a development of the Aventador's 6.5-litre V12 and produces 552 kW.

All content from Kiddle encyclopedia articles (including the article images and facts) can be freely used under Attribution-ShareAlike license, unless stated otherwise. Cite this article:
Lamborghini Facts for Kids. Kiddle Encyclopedia.