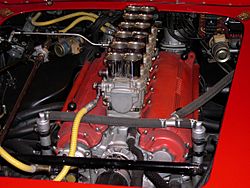 A V12 engine often just called a V12 is an internal combustion engine with 12 cylinders. The engine has six cylinders on each side called banks. The two banks form a "V" shaped angle. In most engines, the two banks are at a 60° angle to each other. All twelve pistons turn a common crankshaft. It can be powered by different types of fuels, including gasoline, diesel and natural gas.

Each cylinder bank is basically a straight-6. This set-up has perfect balance no matter which V angle is used. A V12 engine does not need balance shafts. A V12 angled at 45°, 60°, 120°, or 180° from each other has even firing and is smoother than a straight-6. This provides a smooth running engine for a luxury car. In a racing car, the engine can be made much lighter. This makes the engine more responsive and smoother. In a large heavy-duty engine, a V12 can run slower, and prolonging engine life. 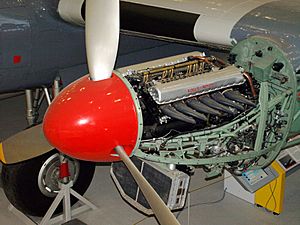 V12 engines were first used in aircraft. By the end of World War I, V12s were popular in the fighters and bombers. Many Zeppelins had V12 engines.

The Rolls-Royce Merlin V12 powered the Hawker Hurricane and Supermarine Spitfire fighters that played a vital role in Britain's victory in the Battle of Britain. The long, narrow configuration of the V12 contributed to good aerodynamics, while its exceptional smoothness allowed its use with relatively light and fragile airframes.

After World War II, V12 engines were mostly replaced by turbojet and turboprop engines. These engines produced more power for their weight, and fewer problems in large aircraft. 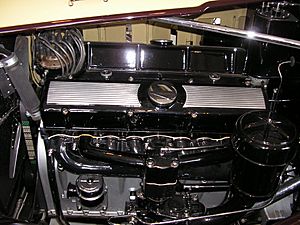 In cars, V12 engines are not common because of their complexity and cost. They are normally found only in high-end sports cars and luxury cars. For these cars, they are desired for their power, low vibration, and distinctive sound.

Before World War II, V12 engines were found in many luxury cars. In the 1930s, V8 engines started to replace the V12s. The V8 engine design was improved to make it lighter and produce more power than the V12. Since World War II, only a few car manufactures have used V12 engines.

In the past, V12 engines were common in Formula One and endurance racing. Ferrari used V12 engines in 1950, the first year of Formula One. Several factors made teams stop using the V12 engine. Improvements to the V8 engine, in particular Ford Cosworth engine. Small, lightweight turbocharged engines were developed that produced more power for the weight. And finally rule changes that limited the size of engines and the power they could produce.

V12 is a common configuration for tanks and other armored fighting vehicles (AFVs).

All content from Kiddle encyclopedia articles (including the article images and facts) can be freely used under Attribution-ShareAlike license, unless stated otherwise. Cite this article:
V12 engine Facts for Kids. Kiddle Encyclopedia.