Battle of Britain facts for kids 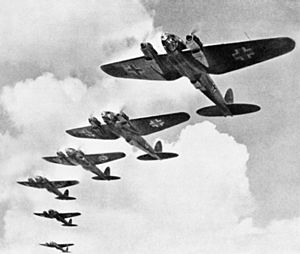 Heinkel He 111 bombers during the Battle of Britain

The Battle of Britain was a continued attack by the German Air Force (Luftwaffe) on Great Britain during the Summer and Autumn of 1940.

Its first objective was to gain control of the air space above Britain from the Royal Air Force (RAF), especially the Fighter Command.

The name comes from a famous speech delivered by Prime Minister Winston Churchill in the House of Commons: "The Battle of France is over. I expect the Battle of Britain is about to begin..."

The Battle of Britain was the first major campaign to be fought only by air forces and was also the largest and longest aerial bombing campaign to that date.

Coastal radar stations were bombed, so that at one point only one radar mast was standing. The British used a back-up system of human observers to get information to the headquarters of Fighter Command. Most historians agree this part of the campaign went in Germany's favour. 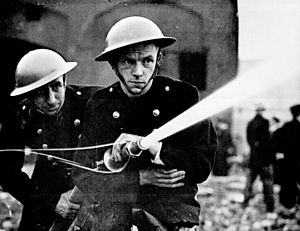 Eventually the Luftwaffe switched to attacking population centres, such as towns and cities, as well as factories. After the RAF bombed Berlin, and German air force bases in France, Adolf Hitler cancelled his orders not to bomb population centres and ordered attacks on British cities.p305 The attacks on civilians were terror bombing tactics designed to cause panic and damage morale.

On the 7th of September 1940, a massive series of raids with nearly four hundred bombers and more than six hundred fighters targeted docks on the Thames in London, day and night.

The RAF 11 Group rose to meet them, in greater numbers than the Luftwaffe expected. 12 Group's Big Wing took twenty minutes to gain formation, missing its intended target, but coming across another formation of bombers while still climbing. They returned, feeling sorry about their limited success, and blamed the delay on being requested too late.

The Luftwaffe began to abandon their morning raids, with attacks on London starting late in the afternoon for 57 nights of attacks in a row.

Fighter Command had been suffering low morale, short of men and machines, and the break from airfield attacks allowed them to recover. This meant that week by week, the defenders were getting stronger, and the losses suffered by the Lutfwaffe were growing.

On 15 September two massive waves of German attacks were prevented by the RAF, with every aircraft of 11 Group being used on that day. The total casualties on this important day were 60 German and 26 RAF aircraft shot down. The German defeat caused Hitler to order, two days later, the "postponement" of preparations for the invasion of Britain. Afterwards, in the face of increasing losses in men, aircraft and the lack of good replacements, the Luftwaffe switched from daylight to night-time bombing.

On 27 September, a Junkers Ju 88 returning from a raid on London was shot down in Kent. The German airmen survived to fight a battle against British troops stationed locally. It is said to be the first time in nearly 300 years that armed invaders had fought with British soldiers on British soil. 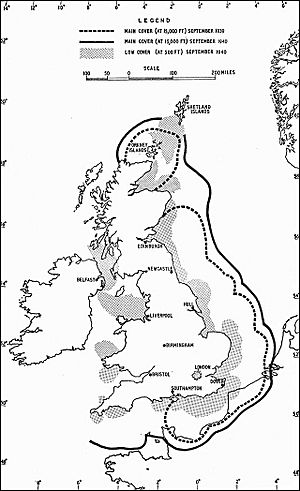 The keystone of the British defence was the detection, command, and control which ran the battle. This was the 'Dowding System', after its chief architect, Air Chief Marshal Sir Hugh Dowding, the leader of RAF Fighter Command.

The core of Dowding's system was the use of Radio Direction Finding (RDF, later called radar, for radio detection and ranging). Its use, plus by information by the Royal Observer Corps, was crucial. It allowed the RAF to intercept incoming German aircraft. Radar operators were linked via telephone (whose wires were laid deep underground with concrete anti-bomb protection) to an operational centre. This centre was Fighter Command control at Bentley Priory. During the Battle several Coastal Command and Fleet Air Arm units came under Fighter Command control. 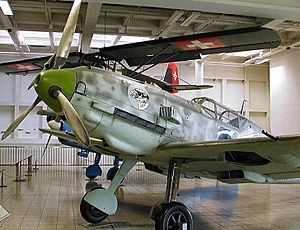 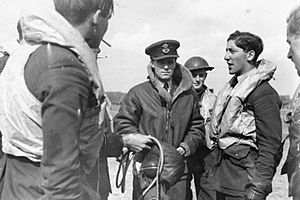 A Spitfire pilot recounts how he shot down a Messerschmitt, Biggin Hill, September 1940

The Luftwaffe's Messerschmitt Bf 109E and 110C squared up against the RAF's workhorse Hawker Hurricane Mk I and the less numerous Supermarine Spitfire Mk I. The Bf 109E had a better climb rate and was 10 to 30 mph faster than the Hurricane, depending on altitude. In September 1940 the more powerful Mk IIa series 1 Hurricane started entering service although only in small numbers. This version was capable of a maximum speed of 342  mph, some 25 to 30  mph faster than the Mk I.

The performance of the Spitfire over Dunkirk came as a surprise, although the German pilots retained a strong belief that the 109 was the superior fighter. However, the Bf 109E had a much larger turning circle than either the Hurricane or the Spitfire. The two British fighters had eight Browning 303 machine guns, while most Bf 109Es had two machine guns and two wing cannons. The Bf 109E and the Spitfire were superior to each other in key areas; for instance, at some altitudes, the Bf 109 could out-climb the British fighter.

The failure of Nazi Germany to achieve its objectives of destroying Britain's air defences, or forcing Britain to negotiate an armistice or an outright surrender, is considered its first major defeat and one of the crucial turning points in the war.

If Germany had gained air superiority, Adolf Hitler might have launched Operation Sea Lion, a planned amphibious and airborne invasion of Britain.

Interesting facts about the Battle of Britian 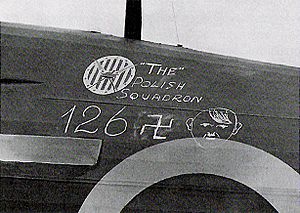 All content from Kiddle encyclopedia articles (including the article images and facts) can be freely used under Attribution-ShareAlike license, unless stated otherwise. Cite this article:
Battle of Britain Facts for Kids. Kiddle Encyclopedia.