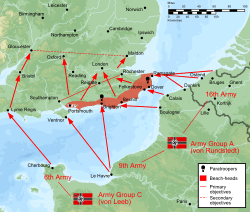 Operation Sea Lion (German: Unternehmen Seelöwe) was the plan to invade the United Kingdom by the Nazis during World War II. The plan began in 1940. However, Germany first had to control the sky and sea of the English Channel before a land invasion. With German Navy weakened during the German invasion of Norway and with the German Air Force defeated in the Battle of Britain, the operation was put off on 17 September 1940 and never happened.

All content from Kiddle encyclopedia articles (including the article images and facts) can be freely used under Attribution-ShareAlike license, unless stated otherwise. Cite this article:
Operation Sea Lion Facts for Kids. Kiddle Encyclopedia.