Edward abdicated (resigned) from the throne, because he wanted to marry the American woman Wallis Simpson. Simpson had been married twice before. As King, he was Head of the Church of England, and the Church did not support divorce. After abdicating as king, he was known as His Royal Highness the Duke of Windsor. His wife was not allowed to be called "Her Royal Highness".

Edward, commonly known as David, was born as the first son of the Prince and Princess of Wales, (later King George V and Queen Mary). As a young man he disliked his royal duties, but he possessed charisma and was popular with the British people. Edward was officially invested as Prince of Wales in a ceremony at Caernarvon Castle on 13 July 1911 and was even tutored by furture Prime Minister David Lloyd George to speak a few words of Welsh.

At the outbreak of the First World War in 1914, Edward, age twenty was keen to participate. He witnessed trench warfare at first-hand and attempted to visit the front line as often as possible, although he did not experience as much hardship and misery as ordinary British soldiers. Edward undertook a military flight in 1918 and gained a pilot's licence later. Throughout the 1920s Edward represented his father, King George V, at home and abroad on many occasions. His popularity was at its greatest peak within this decade and gained him much public and media attention.

However, his increasing womanising and reckless behaviour during the 1920s and 1930s worried Prime Minister Baldwin and his hard working, strict father King George V. Edward was also uninterested with royal duties and disliked the British establishment. George V was disappointed by Edward's failure to settle down in life and was furious with his many affairs with married women, and was reluctant to see him inherit the Crown. George V favoured his son Albert (later King George VI) who was a family man and loyal to his beloved wife.

Edward had a string of relationships with married women including Freda Dudley Ward, and Lady Furness, the American wife of a British peer, who later introduced him to Wallis Simpson. Wallis Simpson was an American who had been twice divorced. Edward later became Wallis Simpson's lover. This further weakened his poor relationship with his father who stated "After I am dead," George said, "the boy will ruin himself in 12 months". Indeed he was right. Less than a year later Edward would cause great damage over the royal family of the sort not seen previously for hundreds of years.

After months of ill health, King George V died on 20 January 1936, and Edward became King Edward VIII. He watched the announcement of his new role from a window of St James's Palace with Wallis Simpson. After only a few weeks, Edward began to cause unease in government circles with actions that were seen as too political. He did not work hard as King and was not careful about important state papers. Far from working, in August and September, Edward and his lover Wallis Simpson simply sailed around the Mediterranean on a luxury steam yacht.

On 16 November 1936, Edward invited British Prime Minister Stanley Baldwin to Buckingham Palace and expressed his plans to marry Wallis Simpson after her divorce. Baldwin was unhappy about this and informed him that his subjects would see it as morally unacceptable, because remarriage after divorce was opposed by the Church of England, and the people did not like Wallis. Edward knew that the government and Prime Minister Stanley Baldwin would resign if the marriage went ahead. That action could have led to a general election and would ruin Edward's status as a politically neutral monarch. This would be disastrous for the Royal Family and damage the nation. As a result he chose to abdicate in December of that year and married Wallis later in 1937. His brother, Prince Albert, Duke of York, became the next king.

Duke of Windsor and later life 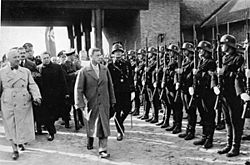 Edward reviewing a squad of SS with Robert Ley, 1937 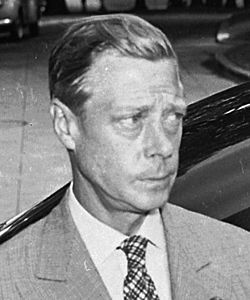 After his abdication, he was given the title Duke of Windsor. He married Simpson in France on 3 June 1937. His brother and mother did not attend the ceremony. Many people became alarmed with what they thought was Edward's pro German stance. Some even said that he favoured German fascism. Hitler considered Edward to be friendly towards Nazi Germany. Even in the 1960s, Edward privately said to a friend, Lord Kinross, "I never thought Hitler was such a bad chap". The Duke and Duchess visited Nazi Germany, against the advice of the British government, and they met Adolf Hitler at his private retreat. During the visit, the Duke gave full Nazi salutes, causing anger in Britain. At the start of the Second World War, the Nazis plotted to persuade the Duke to support the Nazi effort and planned to kidnap him. Lord Caldecote warned Winston Churchill that "[the Duke] is well-known to be pro-Nazi and he may become a centre of intrigue". More problems arose when Edward gave a "defeatist" interview, which angered Churchill even more.

After the war, the Duke and Duchess became celebrities and hosted parties and lived between Paris and New York. In the 1960s, the Duke's health became worse. Because he was a heavy smoker from an early age, he had throat cancer. On 28 May 1972, the Duke died at his home in Paris, less than a month before his 78th birthday. Wallis Simpson was not strong. She suffered from dementia and died 14 years later. The coffin was buried in the Royal Burial Ground behind the Royal Mausoleum of Queen Victoria and Prince Albert at Frogmore.

All content from Kiddle encyclopedia articles (including the article images and facts) can be freely used under Attribution-ShareAlike license, unless stated otherwise. Cite this article:
Edward VIII Facts for Kids. Kiddle Encyclopedia.