Ashburton (Māori: Hakatere) is a large town in the Canterbury Region, on the east coast of the South Island of New Zealand. The town is the seat of the Ashburton District, a territorial authority encompassing the town and the surrounding rural area, which is also known as Mid Canterbury. It is 85 kilometres (53 mi) south west of Christchurch and is sometimes regarded as a satellite town of Christchurch.

Ashburton's historic train station before it was demolished in 2013

Ashburton was named by the surveyor Captain Joseph Thomas of the New Zealand Land Association, after Francis Baring, 3rd Baron Ashburton, who was a member of the Canterbury Association. The town is laid out around two central squares either side of the railway line and main highway, Baring Square East and Baring Square West.

Ashburton is on State Highway 1 86 kilometres (53 mi) south of Christchurch. The Main South Line railway line runs through the centre of town, but passenger trains ceased on 10 February 2002. The town is the centre of an agricultural and pastoral farming district, part of the Canterbury Plains. It has one large suburb, Tinwald, south of the town and the Ashburton River. Tinwald was the junction for the now-closed Mount Somers Branch railway line. The town has three other suburbs: Allenton, Hampstead and Netherby.

The Ashburton District extends from the Pacific Ocean to the Southern Alps, and from the Rangitata River to the Rakaia River, including the towns of Methven, Mount Somers, and Rakaia.

On the whole, Ashburton shares a similar climate to Christchurch i.e. a dry temperate climate (Cfb). However, since it lies further inland at a higher altitude to Christchurch, Ashburton experiences a greater range of temperatures. During summer Ashburton can exceed 30 °C (86 °F), whilst winter can see regular frosts and annual snowfall. Ashburton's heaviest snowfall was 60 centimetres (24 in) on 12 June 2006. 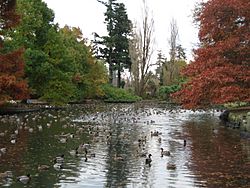 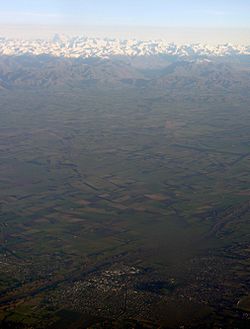 Aerial view of Ashburton, with the Southern Alps in the background

There is a cinema, swimming pool and two local golf courses. There is a walking track coastwards along the northern side of the river from SH 1. The same track extends west along the river with a mountainbike track. The brand new Ashburton Art Gallery sits on State Highway 1 just outside the centre of town.

The Ashburton Club and Mutual School of Arts (MSA) was founded in 1885. The MSA is a member of the NZ Chartered Clubs Association and is located in the central town. The club itself currently has around 4,000 members on its records.

The Aerodrome located near the town centre and is an active light (GA and Microlight) aviation hub and home of the Mid Canterbury Aero Club (GA) and Ashburton Aviation Pioneers.

The beaches adjacent to Ashburton are steep and shingly with a strong undertow, making them unsafe to swim, but suitable for surf-casting. In part to rectify the limitations imposed by the lack of recreational waterways, Lake Hood was constructed just south-east of Tinwald. The Ashburton, Rakaia, and Rangitata Rivers are suitable for fishing, the Rakaia in particular is renowned worldwide for its salmon fishing. Upper reaches of the Rangitata are frequently kayaked and rafted, reaching Grades 3–4. The Rakaia is known for jet-boating. The Ashburton lakes Lake Heron, Lake Camp and Lake Clearwater are inland. On the road to these lakes are Mount Somers and the Mount Somers walkway.

All content from Kiddle encyclopedia articles (including the article images and facts) can be freely used under Attribution-ShareAlike license, unless stated otherwise. Cite this article:
Ashburton, New Zealand Facts for Kids. Kiddle Encyclopedia.