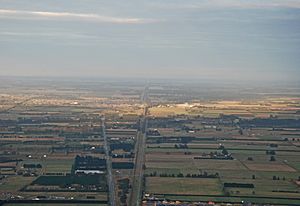 Rolleston from the air

Rolleston is the seat and largest town in the Selwyn District, in the Canterbury region of New Zealand's South Island. It is located on the Canterbury Plains 22 kilometres (14 mi) south-west of Christchurch, and is considered a satellite town of the city. The town has a population of 13,100 (June 2016), making it New Zealand's 30th largest urban area.

Rolleston originated as a railway terminus in 1866, and is named after the Canterbury statesman William Rolleston. Rolleston, who was born in Yorkshire in 1831 and died in 1903, served as Superintendent of the Province of Canterbury from 1868 until 1876 (when central government abolished the New Zealand provinces). He also served as a Member of Parliament, holding various Cabinet portfolios.

The radiata pine plantations that were once a feature of this part of Canterbury have largely been replaced by more water-intensive grazing land to take advantage of the "dairy boom" of the early 21st century. Shelter belts of radiata, another significant earlier feature of the Plains (and very effective at mitigating the desiccating effects of the nor'west wind), have also been removed as they formed a barrier to the huge central-pivot irrigators that are now commonplace in the area. Rolleston is very exposed on the Canterbury Plains and is therefore slightly drier, with a more continental climate, than nearby Christchurch. There are many vineyards in the area.

Rolleston is home to the RYAG (Rolleston youth action group) which is a group formed for Rolleston youth to have a say about what they want in their town. Thanks to some determined youth, Rolleston as of 2010[update] is building a new skate park and holding frequent discos and youth cafes.

Rolleston Prison is located just west of the town, housing up to 260 minimum to medium security male prisoners.

Rolleston is also the home of the Rolleston Volunteer Fire Brigade.

Rolleston College is the sole secondary school in Rolleston. It opened in February 2017 initially to Year 9 students only, and will add years levels as students move through. Students in years 10 to 13 are currently served by Lincoln High School, 12 km away in the nearby town of Lincoln.

State Highway 1 passes through Rolleston on its route between Christchurch and Timaru. In August 2016, construction began to extend the Christchurch Southern Motorway from its current terminus at Hornby to just east of Rolleston.

Two local bus routes serve Rolleston, both being part of Environment Canterbury's Metro system: the Yellow Line route connects Rolleston with central Christchurch, Linwood, and New Brighton via Templeton, Hornby and Riccarton, while route 820 (Burnham to Lincoln) connects Rolleston to the nearby towns of Burnham and Lincoln.

Rolleston is the site of the railway junction between the Midland line to Greymouth and the Main South Line. The town served as a major railway junction point from the 1880s until the late 1980s, when the New Zealand government deregulated the railways, and Rolleston became a stop only for the tourist-oriented TranzAlpine rail service. As of 2010[update] passengers wanting to board the Tranzalpine at Rolleston must specify this when booking. In 1993 Rolleston saw one of the country's worst level-crossing accidents, when a cement mixer truck ran into the side of a passenger train at the now-closed George Holmes Road level crossing and killed 3 train passengers.

Rolleston was close to the epicentre of the 2010 Canterbury earthquake being near the end of the Greendale Fault, experiencing movement two times the strength of that in Christchurch City. Residents were without power following the quake, some for more than 48 hours, and were required to boil water for weeks before services were restored. Rolleston was close to many of the aftershocks following the September quake.

Rolleston suffered low damage due the ground having underlying stones and stable rock. For such reasons, Rolleston has not been affected by liquefaction to date, and only a few houses have been condemned and demolished from earthquake damage.

The 2011 Christchurch earthquake caused a minor amount of extra damage, mostly to buildings which had already been previously affected.

The population of Rolleston has expanded rapidly since the Christchurch earthquakes, due to the land stability and fast tracking of building consents by the Selwyn District Council. House and land valuations in Rolleston have risen faster than any other area of the country, and demand is very high with several new subdivisions being constructed.

All content from Kiddle encyclopedia articles (including the article images and facts) can be freely used under Attribution-ShareAlike license, unless stated otherwise. Cite this article:
Rolleston, New Zealand Facts for Kids. Kiddle Encyclopedia.