Timaru ( Māori: Te Tihi-o-Maru) is a port city in the southern Canterbury region of New Zealand, located 157 kilometres southwest of Christchurch and about 196 kilometres northeast of Dunedin on the eastern Pacific coast of the South Island. The Timaru urban area is home to 28,800 people, and is the largest urban area in South Canterbury, and the second largest in the Canterbury Region overall, after Christchurch. The city is the seat of the Timaru District, which includes the surrounding rural area and the towns of Geraldine, Pleasant Point and Temuka, which combined has a total population of 46,700.

Caroline Bay beach is a popular recreational area located close to Timaru's city centre, just to the north of the substantial port facilities. Beyond Caroline Bay, the industrial suburb of Washdyke is at a major junction with State Highway 8, the main route into the Mackenzie Country. This provides a road link to Fairlie, Twizel, Lake Tekapo, Aoraki / Mount Cook and Queenstown.

Timaru has been built on rolling hills created from the lava flows of the extinct Mt Horrible volcano, which last erupted many thousands of years ago. The result is that most of the main streets are undulating, a clear contrast with the flat landscape of the Canterbury Plains to the north. This volcanic rock is used for the construction of local "bluestone" buildings.

The origin of the name 'Timaru' is disputed . Some believe that it derives from Māori Te Maru, which can mean a 'place of shelter'. However, other authorities allege that Timaru originates from a literal translation of the combination of ti, a cabbage tree and maru, meaning 'shady'. Timaru is pronounced TI-mə-roo.

Māori canoes seem to have employed the site of Timaru as a place to rest on journeys up and down the eastern coastline for many years before the arrival of the first Europeans in the 19th century. The area includes over 500 sites with traces of Māori rock art, particularly in the rock overhangs and caves of the Opuha and Opihi river valleys, to the west of modern-day Timaru. Archaeologists have suggested that Māori tribes were permanently settled in the district before 1400 AD. During the 17th or 18th century the resident Ngāti Mamoe were driven southwards into Fiordland by an invasion of the Ngāi Tahu, who came from the North Island. 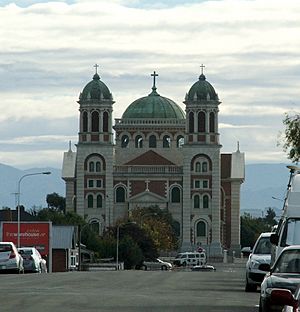 European settlement began with the construction of a whaling station in 1839 by the Weller brothers of Otago at Patiti Point, close to the present town centre. A supply ship, The Caroline, provided the name for a local bay. Later a sheep station, known as The Levels, was set up on land obtained by the Rhodes brothers, and run by George Rhodes. One of the earliest settlers was Captain Henry Cain, who set up a store in 1857 on behalf of Henry Le Cren of Lyttelton, and Le Cren himself moved to Timaru in the following year. Few lived in Timaru until 1859 when the ship SS Strathallan arrived from England, carrying a party of 120 immigrants. Persistent land disputes arose between the brothers and local government officials with the result that two townships were established in the port area, Government Town and Rhodestown. These eventually merged into a single community in 1868. Given this division, until recently none of the main north-south streets lined up. Stafford Street, which became the main thoroughfare, was formed along the early bullock wagon trail.

Following the loss of a number of vessels off the coast, work started on the redevelopment of the artificial port in 1877, which eventually caused sand washed south down the Pacific shoreline to build up against the northern mole. This was the beginning of the extensive land reclamation around the Caroline Bay district, an area which is still growing today.

Timaru continued to expand during the 20th century, with much of the development taking the form of wooden colonial style bungalows set in individual sections of land. Sacred Heart Basilica was opened in 1911.

Timaru is situated along the Pacific Ocean coast. Much of the hinterland is farmland. To the north and northeast are the Canterbury Plains.

Timaru has a relatively dry temperate climate similar to that of neighbouring Ashburton and Christchurch, classified as oceanic climate (Cfb) by Köppen-Geiger climate classification system. Temperatures are warm in summer and cold in winter, with Timaru's extreme maximum temperature being 41.3 °C on 6 February 2011 and extreme minimum temperature of −9.1 °C on 3 August 1998. Rain is evenly distributed throughout the year, with a very small proportion of it falling as snow.

Timaru is on State Highway One (SH1), the main road route down the eastern coast of the South Island.

There are regular coach and minibus services to Christchurch, Dunedin, Invercargill, Queenstown and the Mackenzie Country, leaving from outside the Visitor Information Centre, which provides booking facilities and other travel services.

The Main South Line section of the South Island Main Trunk Railway runs through Timaru and is a significant freight corridor. Passenger rail services were discontinued after the cancellation of the Southerner in February 2002. Between 1949 and 1970, Timaru was serviced by the South Island Limited, one of the former New Zealand Railways Department's most prestigious trains.

Richard Pearse Airport is to the north of the town. It is equipped to handle light aircraft and short haul domestic flights, with regular services to Wellington.

A number of bus services connect Timaru's suburbs to the town centre. 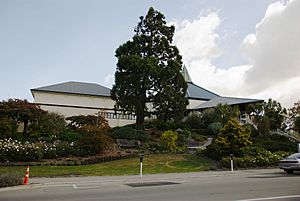 The South Canterbury Museum is the main museum for the region, containing exhibits relating to physical geography and the environment, fossil remains, Māori rock art, the early settlement of the district, local maritime history, scrimshaw, the E P Seally natural history collection, and information about Richard Pearse, a local inventor and his attempts at manned flight in the first years of the 20th century.

The Aigantighe (a Scots Gaelic word pronounced "egg and tie") Art Gallery in Wai-iti Road is the South Island's third largest art museum. It holds a collection of New Zealand, Pacific, Asian and European art works from the sixteenth century to the present day and includes a sculpture garden. The gallery was founded in 1956 and is housed in a homestead built in 1908.

Timaru has with a number of open spaces, public gardens and parks. The Trevor Griffiths Rose Garden at Caroline Bay Park is a major feature of the Timaru Piazza development. The parkland of the Bay Area contains a mini golf course, a roller skating rink, a maze and staging for musical events. It is home to the annual Summer Carnival that takes place over the Christmas and New Year holiday period. To the south of the city centre are the Timaru Botanic Gardens, first laid out in 1864, with a notable collection of roses and native tree ferns. To the west is the Centennial Park Reserve, opened in 1940, that includes a tranquil 3.5 km walkway following the wooded valley of the Otipua Creek.

The Caroline Bay Carnival, featuring live performances, games, and side shows, takes place from Boxing Day through to mid-January at Caroline Bay Park.

The Theatre Royal at 118 Stafford Street is home of much of Timaru's live entertainment.

The Timaru District Library has branches situated in Timaru, Temuka and Geraldine.

The first Reading Room was opened in the School House, Barnard Street in 1862. It was open daily from 5.00pm – 10.00pm and on Saturdays 10.00am – 8.00pm. English and Colonial Newspapers were provided and a selection of Library Books for the use by members. In 1870 the Mechanics Institute was created by an addition on an existing building and aimed to provide a Library, Reading Room and News Room.

Timaru Public Library was officially opened in 1909 on the present Timaru District Council site. It was a Carnegie library, built with a 3,000 pound grant from Andrew Carnegie of New York – the condition under which the money was given was that the reading rooms should be open to everyone and that the lending Library should be free to ratepayers of the borough. The current library was opened on Sophia Street by the roundabout in 1979. It was designed by Miles, Warren and Mahoney.

Many of Timaru's nightclubs, bars and restaurants are open every night.

All content from Kiddle encyclopedia articles (including the article images and facts) can be freely used under Attribution-ShareAlike license, unless stated otherwise. Cite this article:
Timaru Facts for Kids. Kiddle Encyclopedia.