Kids Encyclopedia Facts
For the basin of the Canadian river, see Mackenzie River. 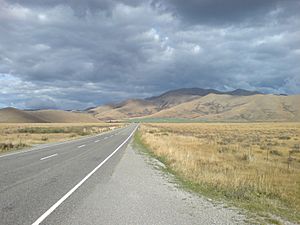 The Mackenzie Basin (Māori: Te Manahuna), popularly and traditionally known as the Mackenzie Country, is an elliptical intermontane basin located in the Mackenzie and Waitaki Districts, near the centre of the South Island of New Zealand. It is the largest such basin in New Zealand. Historically famous mainly for sheep farming, the sparsely populated area is now also a popular tourism destination.

The basin was named in the 1850s by and after James Mckenzie (or in his native Scottish Gaelic: Seumas MacCoinneach), a shepherd and would-be farmer of Scottish origin. Mckenzie was captured for allegedly stealing sheep; he herded his flocks in what was then an area almost totally empty of any human habitation, though Māori previously lived there intermittently. After his capture, the area was soon divided up amongst new sheep pasture stations in 1857. 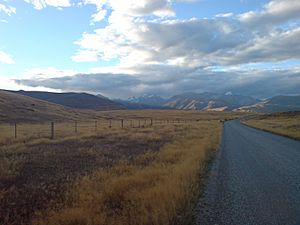 The Southern Alps form the northern and western boundaries of the basin. 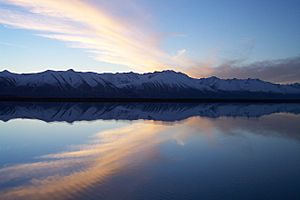 The basin extends approximately 100 kilometres (62 mi) north to south, and 40 kilometres (25 mi) east to west. The Southern Alps constitute its western edge. The majority of the Mackenzie Basin is within Canterbury, although the area to the south of the Waitaki River is in Otago.

The basin is drained by the Waitaki River. Prominent rivers crossing the Mackenzie Basin include the Ahuriri, the Hakataramea and the Tekapo Rivers. Lakes Ohau, Pukaki, Alexandrina and Tekapo lie within the Mackenzie Basin, as do the artificial hydroelectric lakes of Ruataniwha, Benmore and Aviemore.

The Ohau skifield near Omarama, and Roundhill and Mount Dobson Ski Areas at Lake Tekapo, are small commercial skifields popular amongst many living in Canterbury and Otago.

The Mackenzie Country is frequently utilized as the principal and second-unit location for television commercials, documentaries, and motion pictures, including much of Peter Jackson's epic The Lord of the Rings film trilogy and The Hobbit film trilogy.

Gliding is another common activity within the Mackenzie Basin, and the area was host to a Gliding World Cup event in 1995, as well as being the home of several gliding clubs, airfields, and numerous private glider pilots, of both amateur and professional status.

Due to its clean, dry and dark sky, the Mackenzie Basin serves as an important area for New Zealand-based astronomy, with a number of related facilities located there, including the nation's premier astronomical observatory, the University of Canterbury's Mount John University Observatory, and several amateur observatories. Astronomy-related tourism is an increasing contributor to the area's economy, with more astro-tourism ventures in development near Lake Tekapo, Mount Cook village (planetarium) and Omarama. Each June the annual mid winter star party is held at new moon on the Omarama airfield.

Plans are currently well-progressed to have the Mackenzie Basin designated as a Dark Sky Reserve, possibly the World's first, that will probably result in strengthening local ordinances to prevent light pollution. A recent World Heritage Committee meeting in Seville in 2009 was positive about the proposed project.

All content from Kiddle encyclopedia articles (including the article images and facts) can be freely used under Attribution-ShareAlike license, unless stated otherwise. Cite this article:
Mackenzie Basin Facts for Kids. Kiddle Encyclopedia.