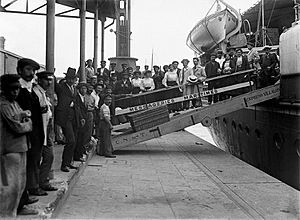 Immigration means people moving from their native regions into another country to live. People who immigrate are called immigrants. Some are illegal immigrants. Some immigrants are refugees and some ask for political asylum. 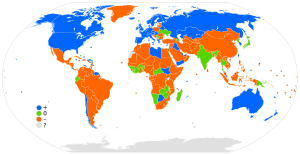 As with other changes, people go to another place for several reasons:

Immigration has always been difficult. When people immigrate, they leave behind their friends, families, and culture. They also have to sell what they have, like a house, farm, or anything else too big to bring. Immigrating is also difficult because of the strict Immigration laws and qualifications within each country. It is hard to become a legal citizen of a country. It takes time (about 5 years in the US) and a lot of patience to become legally apart of a country.

Learning different languages in order to feel comfortable in a country is also extremely difficult for some people They might not have the opportunity to go a to school and learn certain things. Not knowing or beginning to learn the language of a country the person immigrates to can be very uncomfortable at first. This is because communication is needed within our everyday lives, such as at work, in grocery stores, restaurants, and just everyday life.

Travelling can also be very expensive. Many immigrants have to use all their money to pay fees or plane tickets.

Once immigrants arrive in the new countries, they can face many difficulties. They may have to get a job, find a house, and learn a new language. Immigrants can also be victims of racism.

All content from Kiddle encyclopedia articles (including the article images and facts) can be freely used under Attribution-ShareAlike license, unless stated otherwise. Cite this article:
Immigration Facts for Kids. Kiddle Encyclopedia.