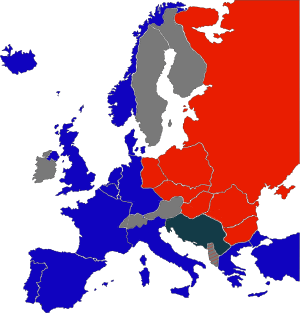 Countries behind Iron Curtain are shaded red. Yugoslavia, although communist-run, was independent of the Eastern Bloc. Similarly, communist Albania broke with the Soviet Union in the early 1960s, aligning itself with the People's Republic of China after the Sino-Soviet split.

The Iron Curtain is a term related to the Cold War. It means the border between the states that were members of the Warsaw Pact (in Eastern Europe), and those that were not (then called The West).

This border was between East Germany and West Germany, between Czechoslovakia and Austria, and between Hungary and Austria.

At the end of World War II Austria, Germany and Berlin were divided into four zones. In 1955, a treaty was signed. The treaty said that the Allied forces must leave Austria. In return, the Austrian government promised to do certain things, like not form a territorial union with Germany and recognise certain minorities, amongst others. The whole of Europe was separated into a Soviet Union zone in the East and a neutral or US-dominated zone in the West. The splitting of Europe, Germany and especially Berlin into two political blocks was part of the Cold War between the United States of America and other western countries on one side and the Soviet Union and its allies on the other. The wartime Allied Forces split after their common enemy, Nazi Germany, was defeated in May 1945.

The idea of the Iron Curtain was referring to the separation of the communist Europe compared to the democratic west, it was the idea that what was happening in the satellite states and in Russia was secret to the rest of the world. Satellite state refers to a country being controlled by another, in this case Russia was controlling countries such as Hungary, Poland, Romania, Bulgaria and others which were previously controlled by Germany in WW2.

The idea of the Iron Curtain was first made public by Winston Churchill, a famous Prime Minister of the United Kingdom during WW2, when invited to speak at American University by Harry S. Truman (the American president at the time). Churchill's speech was seen by Nikita Khrushchev; leader of the USSR from 1958 until 1964 as a declaration of war, as Churchill urged a struggle against the Soviet Union.

All content from Kiddle encyclopedia articles (including the article images and facts) can be freely used under Attribution-ShareAlike license, unless stated otherwise. Cite this article:
Iron Curtain Facts for Kids. Kiddle Encyclopedia.