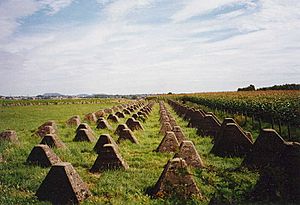 Dragon's teeth near Aachen, Germany, part of the Siegfried Line.

Dragon's teeth (German: Drachenzähne) are square-pyramidal fortifications of reinforced concrete first used during the Second World War to impede the movement of tanks and mechanised infantry. The idea was to slow down and channel tanks into killing zones where they could easily be disposed of by anti-tank weapons.

They were employed extensively, particularly on the Siegfried Line.

Dragon's teeth were used by several armies in the European Theatre. The Germans made extensive use of them on the Siegfried Line and the Atlantic Wall. Typically, each "tooth" was 90 to 120 cm (3 to 4 ft) tall, depending on the precise model.

Land mines were often laid between the individual "teeth", and further obstacles were constructed along the lines of "teeth", such as barbed wire to impede infantry or diagonally-placed steel beams to further hinder tanks. Many were laid in the United Kingdom in 1940–1941, as part of the effort to strengthen the country's defences against a possible German invasion.

Behind minefields were the dragon's teeth. They rested on a concrete mat between ten and thirty meters wide, sunk in a meter or two into the ground (to prevent any attempt to tunnel underneath them and place explosive charges). On top of the mat were the teeth themselves, truncated pyramids of reinforced concrete about a meter in height in the front row, to two meters high in the back. They were staggered and spaced in such a manner that a tank could not drive through. Interspersed among the teeth were minefields, barbed wire, and pillboxes that were virtually impregnable by the artillery and set in such a way as to give the Germans crossing fire across the entire front. The only way to take those pillboxes was for infantry to get behind them and attack the rear entry. But behind the first row of pillboxes and dragon’s teeth, there was a second, and often a third, and sometimes a fourth.

Due to the huge numbers laid and their durable construction, many thousands of dragon's teeth can still be seen today, especially in the remains of the Siegfrieds.

Switzerland continues to maintain lines of dragon's teeth in certain strategic areas. In military jargon, these constructions are often referred to as "Toblerone lines", after the chocolate bar.

Dragon's teeth are also present in some areas along the Korean Demilitarized Zone borderline. They were also used on the East German side of the Berlin Wall.

The term has survived into the present day and now also can be used to describe any line of posts or pegs set into the ground to deter vehicle access, for example in rural car parking areas or alongside roads. "Bollard" is another term for such a post.

Some countries, such as those formed after the breakup of Yugoslavia, have movable teeth, positioned at roadsides at strategic locations, which are able to be lifted and placed on the roads.

Some stages of Rallye Deutschland, the German round of the WRC rally championship, are run on roads belonging to the military training ground at Baumholder. The roads are lined with dragon's teeth, known as "Hinkelsteine". They usually serve as obstacles to prevent tanks from leaving the roads, and cause devastation to any rally car which veers off track.

All content from Kiddle encyclopedia articles (including the article images and facts) can be freely used under Attribution-ShareAlike license, unless stated otherwise. Cite this article:
Dragon's teeth (fortification) Facts for Kids. Kiddle Encyclopedia.