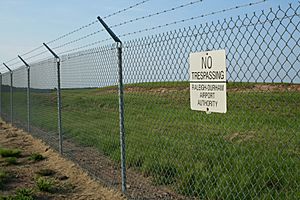 Barbed wire (also called barb wire) is a kind of wire that is used to make cheap fences. It has sharp metal points (barbs), which make climbing over it painful.

The first patent in the United States for barbed wire was issued in 1867 to Lucien B. Smith of Kent, Ohio, who is regarded as the inventor. Joseph Glidden of DeKalb, Illinois, received a patent for the modern invention in 1874 after he made his own modifications to previous versions.

It was first used for controlling cattle.

All content from Kiddle encyclopedia articles (including the article images and facts) can be freely used under Attribution-ShareAlike license, unless stated otherwise. Cite this article:
Barbed wire Facts for Kids. Kiddle Encyclopedia.