The town is built around an inlet called Queenstown Bay on Lake Wakatipu, a long thin Z-shaped lake formed by glacial processes, and has spectacular views of nearby mountains such as The Remarkables, Cecil Peak, Walter Peak and just above the town; Ben Lomond and Queenstown Hill.

The Queenstown-Lakes District has a land area of 8,704.97 square kilometres (3,361.01 sq mi) not counting its inland lakes (Lake Hāwea, Lake Wakatipu, and Lake Wanaka). The region has an estimated resident population of 34,700 (June 2016). Its neighbouring towns include Arrowtown, Glenorchy, Kingston, Wanaka, Alexandra, and Cromwell. The nearest cities are Dunedin and Invercargill. Queenstown is known for its commerce-oriented tourism, especially adventure and ski tourism.

The area was discovered and first settled by Māori before non-Māori arrived. The first non-Māori to see Lake Wakatipu was European Nathanael Chalmers who was guided by Reko, the chief of the Tuturau, over the Waimea Plains and up the Mataura River in September 1853. Evidence of stake nets, baskets for catching eels, spears and ashes indicated the Glenorchy area was visited by Māori. It is likely Ngāi Tahu Māori visited Queenstown en route to collect Pounamu (greenstone). There was a settlement called Te Kirikiri Pa occupied by the tribe of Kāti Mamoe which was situated in the location of the current Queenstown Gardens, but by the time European migrants arrived in the 1860s this settlement was no longer being used.

European explorers William Gilbert Rees and Nicholas von Tunzelmann were the first non-Maoris to settle the area. Rees established a high country farm in the location of Queenstown's current town centre in 1860, but the discovery of gold in the Arrow River in 1862 encouraged Rees to convert his wool shed into a hotel named the Queen's Arms, now known as Eichardt's. Many Queenstown streets bear names from the gold mining era (such as Camp Street) and some historic buildings remain. William's Cottage, the Lake Lodge of Ophir, Queenstown Police Station, and St Peter's Anglican Church lie close together in a designated historic precinct.

There are various apocryphal accounts of how the town of Queenstown was named however the following is the most likely:

When William Rees first arrived in the area and built the homestead the area was known as The Station although miners soon referred to it as The Camp from 1860 to 1862.

The miners and especially the Irish had taken an interest in the ceremony held for a small town called The Cove in Ireland which was renamed to Queenstown in honour of Queen Victoria in 1850. They may have had their own ceremony at the intersection of Rees and Beach Streets replicating some of the elements in the renaming of the Irish town.

Subsequent to this a public meeting was held for the purpose of naming the township on the lake in January 1863 (probably the weekend of the 3rd and 4th) in which the town was officially given the name of Queenstown in reference to Ireland's Queenstown. By 9 and 10 January 1863 the town was being reported with the name of Queenstown from several reports written by a correspondent in the Otago Witness on Monday the 5th and Tuesday the 6th. It was during the meeting there may have been a reference by a miner of the town being "fit for a Queen" (this is one of the most popular accounts of how the town was named).

The Māori name for Queenstown of Tāhuna means shallow bay. 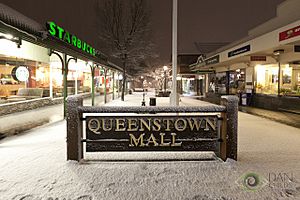 The Queenstown Mall in winter 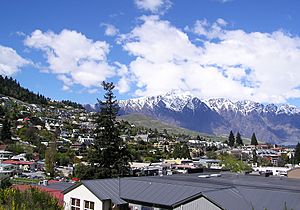 Queenstown and the Remarkable Mountains 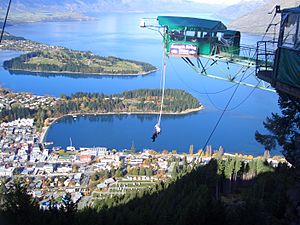 Queenstown is a major centre for snow sports in New Zealand, with people from all over the country and many parts of the world travelling to ski at the four main mountain ski fields (Cardrona Alpine Resort, Coronet Peak, The Remarkables and Treble Cone). Cross country skiing is also available at the Waiorau Snowfarm, near Cardrona village.

Queenstown lies close to the centre of a small wine producing region, reputed to be the world's southernmost. The Two Paddocks vineyard is owned by local actor Sam Neill. Neighbouring, historic Arrowtown features restaurants and bars.

Other tourist activities include:

Locations for television and film

Jane Campion's six-part drama mystery Top of the Lake was shot during 2012 for pay TV release in 2013. The lakes of the Wakatipu appear ominous, and the Southern Alps spectacular. The main location is Moke Lake and scenes were shot on Lower Beach Street and Coronation Drive, and at a supermarket and bottle store on Shotover Street.

In 2010, Cycle 14 of America's Next Top Model, was, in part filmed in Queenstown. The cycle was won by Krista White. Raina Hein was runner up.

Queenstown and the surrounding area contains many locations used in the filming of the The Lord of the Rings film trilogy. Locations used include Paradise near Glenorchy, at the head of Lake Wakatipu.

Queenstown became popular in South Asia after the release of Bollywood Blockbuster Kaho Naa... Pyaar Hai which was partially shot there. Starring sensational debuts by Hrithik Roshan & Amisha Patel it was this film that opened the doors for both tourists and filmmakers from India to New Zealand with Queenstown being the most sought after destination. Queenstown featured for 17 minutes in I Hate Luv Storys, a 2010 Bollywood romantic comedy. Queenstown and the surrounding areas were also used in the 2009 X-Men Origins: Wolverine film. Mee-Shee: The Water Giant was shot in Queenstown in 2005, and released to DVD in the same year. Queenstown was also used to film most of the 1988 The Rescue. Queenstown was the base for filming the George Lucas 1988 fantasy film Willow.

Filming of the 1981 film Race for the Yankee Zephyr took place in and around Queenstown, the first major motion picture production for the area.

The first and last episodes of the fifth season of The Mole were filmed in Queenstown. In the latter episode, the final three contestants took the final computer quiz on the Kingston Flyer.

The 2017 Filipino drama film Northern Lights was shot entirely on location in Queenstown substituting for the setting of Alaska. 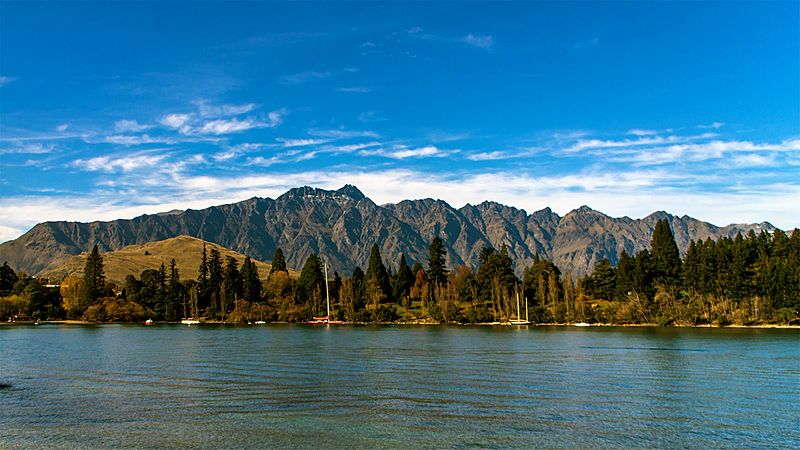 Queenstown is situated on the shore line of Lake Wakatipu, the third largest lake by surface area in New Zealand. It is at a relatively low altitude for a ski and snowboarding centre at 310 metres above sea level on the shores of the lake, but nestled among mountains. There are close-by gorges and some plains suitable for agriculture.

Because of its relatively moderate altitude (310 metres) but with high mountain surroundings, it has an oceanic climate (Köppen climate classification Cfb). Summer has long warm days with temperatures that can reach 30 °C while winters are cold with temperatures often in single digits with frequent snowfall, although there is no permanent snow cover during the year. As with the rest of Central Otago, Queenstown lies within the rain shadow of the Southern Alps, but being closer to the west coast the town is more susceptible to rain-bearing fronts compared to nearby Cromwell, Wanaka and Alexandra. The hottest recorded temperature in Queenstown is 34.1 °C (93 °F), while the coldest is −8.4 °C (17 °F).

Queenstown is accessible by road and air but not by rail (similar to Kaitaia, Taupo and Nelson).

As a resort centre, there are many bus services that operate into Queenstown, with most being for package tours, but daily services for the local or itinerant are available to and from Invercargill, Dunedin and Christchurch, which are the main cities closest to Queenstown.

Queenstown Airport receives flights from Australia by Air New Zealand, Qantas, Virgin Australia and Jetstar and in particular, to Brisbane, Gold Coast, Melbourne, and Sydney (the frequency is much increased over the ski season and during summer). Domestic flights operate to Auckland, Christchurch, Dunedin, Hamilton, Nelson and Wellington. It is New Zealand's busiest helicopter base, also the fourth busiest airport by passenger traffic, and is also heavily used for tourist 'flightseeing', especially to Milford Sound and Mount Cook, using both fixed-wing and rotary-wing aircraft.

The primary road access to the Queenstown area is via State Highway 6 (SH6), which travels from Cromwell through the Kawarau Gorge to Frankton, where a 9 km spur (SH6A) leads to the CBD and connects with the Glenorchy Road. SH6 continues south, crossing the Kawarau river before heading down the eastern side of Lake Wakatipu to Kingston before crossing the provincial boundary and emerging on the plains of Southland, terminating in the city of Invercargill. A difficult road over the Crown Range leads to Cardrona skifield and Wanaka, and is New Zealand's highest paved public road pass.

Queenstown is the departure point for a large number of day trips to the Milford Sound, which entails a return trip of approximately 12 hours. There are scenic flights available to Milford Sound. A return flight, including a two-hour cruise, is approximately four hours.

Suburbs and nearby areas

Residential housing in the Queenstown area is quite expensive due to factors such as the town being a tourist destination, its lack of land and its desirability to foreigner and investors. Queenstown is rated the second highest average cost per property in New Zealand with only Auckland being higher as of 2016.

Panorama of the view from the Remarkables towards Queenstown Airport, with Queenstown beyond

All content from Kiddle encyclopedia articles (including the article images and facts) can be freely used under Attribution-ShareAlike license, unless stated otherwise. Cite this article:
Queenstown, New Zealand Facts for Kids. Kiddle Encyclopedia.