Many streets in the city, especially in the centre and main shopping district, are named after rivers in Great Britain, mainly Scotland. These include the main streets Dee and Tay, as well as those named after the Forth, Tyne, Esk, Don, Thames, Mersey, Ness, Yarrow, Spey and Eye rivers. 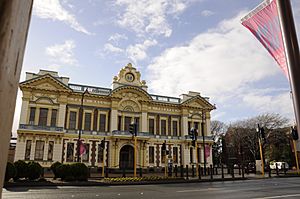 Civic Theatre, the town hall of Invercargill – built in 1906.

Southland was a scene of early extended contact between Europeans and Maori, notably whalers and missionaries – Wohlers at Ruapuke. In 1853, Walter Mantell purchased Murihiku from local Maori iwi, claiming the land for European settlement. Otago, of which Southland was itself part, was the subject of planned settlement by the Free Church, an offshoot of the Presbyterian Church of Scotland. Settlement broadened with the discovery of gold in Central Otago in the 1860s. Today, traces of Scottish speech persist in Southland voices, with R often pronounced with a rolling burr. This is more noticeable among country people.

In 1856, a petition was put forward to Thomas Gore Browne, the Governor of New Zealand, for a port at Bluff. Due to the Otago gold rush, the region's population grew during the 1860s with the settlement of Bluff. Browne agreed to the petition and gave the name Invercargill to the settlement north of the port. Inver comes from the Scottish Gaelic word inbhir meaning a river's mouth and Cargill is in honour of Captain William Cargill, who was at the time the Superintendent of Otago, of which Southland was then a part. The settlement's chief surveyor was John Turnbull Thomson, a British civil engineer.

Under the influence of James Menzies, Southland Province (a small part of the present Region, centred on Invercargill) seceded from Otago in 1861 following the escalation of political tensions. However, rising debt forced Southland to rejoin Otago in 1870 and the provincial system, and with it the province of Otago, was abolished entirely in 1876. This debt was caused by a population decline stemming from poor returns from pastoral farming. In 1874, Invercargill's population was less than 2,500 which reflected the drift north to large centres. In the 1880s, the development of an export industry based on butter and cheese encouraged the growth of dairy farming in Southland. In December 1905, Invercargill voted in local prohibition of alcohol sales. This lasted for 40 years until voted out by returning servicemen in the Second World War. Drinking continued meanwhile, thanks to hotels and liquor merchants in outlying districts, huge volumes of beer, often in kegs, brought to private homes, or sold by the glass by keggers at hiding spots round the City. When prohibition ended, a committee of citizens persuaded the Government to give the monopoly on liquor sales in Invercargill to the specially formed Invercargill Licensing Trust. Based on a scheme in Carlisle, England, it returns profits to city amenities. Even today, alcohol is not sold in supermarkets.

In recent years, publicity has been brought to the southern city by the election of Tim Shadbolt, a colourful and outspoken former student activist and former mayor of Waitemata City, as mayor. He once appeared on a cheese advertisement stating "I don't mind where, as long as I'm Mayor". His supporters like the colour he brings to the city. His opponents refer to his controversial mayoral career in the Auckland suburbs and to his attitude to veterans during his opposition to the Vietnam War. Publicity and students have also come to the city by the Southern Institute of Technology's "Zero Fees" scheme, which allows New Zealand citizens and permanent residents to study while only paying for material costs of their study, and not tuition fees. 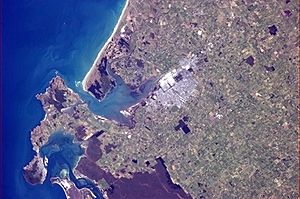 Invercargill is the southernmost city in the Commonwealth of Nations. Invercargill is situated on the fertile and alluvial Southland Plains, which is amongst some of New Zealand's most fertile farmland. Southern Invercargill lies on the shore of the New River Estuary, while the northern parts lie on the banks of the Waihopai River. 10 kilometres west of the city centre lies Oreti Beach, a long expanse of sand stretching from the Sandy Point area to nearby Riverton.

Invercargill has a temperate oceanic climate. The mean daily temperature ranges from 5.2 °C (41.4 °F) in July to 14 °C (57 °F) in January. The yearly mean temperature is 9.8 °C (49.6 °F). Rainfall averages 1,112 millimetres (43.8 in) annually, and measurable snowfall is occasionally seen during the winter months of June to September. It is the cloudiest city in New Zealand with only 1,580 hours of sunshine per annum. Despite its cloudiness, and a relatively high frequency of rainy days, Invercargill receives less rain than either Auckland or Wellington. Invercargill is also New Zealand's second windiest city, after Wellington.

Invercargill is the "City of Water and Light". The "light" refers to the long summer twilights and the aurora australis (southern lights). The "water" reference, humorists suggest, comes from notorious horizontal, driving rain in high wind at the corner of the two main streets, Dee and Tay. A recent sign also states "Invercargill, where dreams can come true" with an image from the 2005 film The World's Fastest Indian.

In September 2010, Invercargill's heaviest snowfall in living memory heralded a run of unseasonably cold weather. A few buildings were damaged, notably Stadium Southland, the roof of which collapsed under the weight of the snow; and a decorating store. Many other stores were shut, and Invercargill Airport was closed for a day.

Panorama of Invercargill from the city's historic watertower. Queen's Park can be seen toward the right of the image.

Invercargill is the southernmost city on New Zealand's state highway network and is linked to Fiordland and the Catlins by the Southern Scenic Route and Dunedin and Gore by SH 1. It is also the southern end of SH6 coming from Queenstown and the West Coast. The main streets of Invercargill: Dee (SH 6) and Tay (SH 1) measure over 40 metres wide. Numerous roads in the city are dual-carriageway but there are no expressways/motorways proposed for the city.

Invercargill is at the southern end of the Main South Line railway, which extends up the east coast to Christchurch and Lyttelton via Dunedin. It was the first town in New Zealand to have a steam locomotive and had the first railway in the country . Though once the centre of a much larger rail network, over the years, this has diminished. Passenger trains no longer call at Invercargill, except for occasional excursions. Until the cancellation of The Southerner in 2002, Invercargill had the southernmost passenger railway station in the world. The Bluff Branch extends south from Invercargill and has been freight-only since 1967. The Wairio Branch extends northwest from Invercargill to the Solid Energy coalfields near Ohai and continues to carry freight even after the closing of the Ohai coal mine.

During the mid-1950s, Invercargill Airport was used for fuel top-up and final take off by Operation Deep Freeze. Twin-engine propeller-driven planes destined for McMurdo Sound in the Antarctic used the airport, assisted in takeoff by JATO rockets. Larger aircraft flew from Christchurch when a permanent Deep Freeze base was established there.

Southern Wings is the only aeroclub based at the airport and runs charter flights as well as running a flight school.

When Invercargill hosted the national brass band contest in 1909, Alex's brother Tom asked for a test piece for the contest and Alex offered this piece to the city. On the music he wrote,

"To Invercargill, the Southernmost City in New Zealand (End of the World), and its Citizens, I dedicate this March as a memento of the many pleasant years spent there in my boyhood."

All content from Kiddle encyclopedia articles (including the article images and facts) can be freely used under Attribution-ShareAlike license, unless stated otherwise. Cite this article:
Invercargill Facts for Kids. Kiddle Encyclopedia.