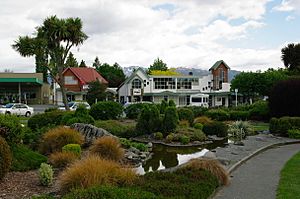 Tourism and farming are the predominant economic activities in the area. Lying as it does at the borders of Fiordland National Park, it is the gateway to a wilderness area famed for tramping and spectacular scenery. Many tourists come to Te Anau to visit the famous nearby fiords Milford Sound / Piopiotahi and Doubtful Sound / Patea. The town is also used as a base for those undertaking the Milford Track and the Kepler Track, the latter being a 4-day loop from Te Anau. Visitors to the area also partake in activities such as kayaking, cycling, jet boat riding, fishing and hunting, farm tours and seaplane/helicopter sightseeing. In 2014, readers of New Zealand's Wilderness magazine voted Te Anau as the best location in New Zealand for tramping (hiking) opportunities. The town has a wide range of accommodation, with over 4,000 beds available in summer.

Te Anau is served by Te Anau Airport which is 15 km south of the town on State Highway 95. It was proposed in 2016 to develop the airport in order to enable commercial flights in from Christchurch in order to boost tourism.

All content from Kiddle encyclopedia articles (including the article images and facts) can be freely used under Attribution-ShareAlike license, unless stated otherwise. Cite this article:
Te Anau Facts for Kids. Kiddle Encyclopedia.