The Antipodes parakeet or Antipodes Island parakeet (Cyanoramphus unicolor) is a parrot in the family Psittaculidae that is endemic to the Antipodes Islands of New Zealand. It is one of two parrot species found on the islands, and one of only five ground-dwelling parrots in the world. They are long-living birds that may live up to 10 years of age, but the introduction of mice that compete with them for food is a threat to their survival on the Antipodes Islands. Unusually for parrots, they sometimes prey upon other birds, a trait shared by another New Zealand parrot, the kea.

The Antipodes parakeet was depicted in 1831 by the English artist Edward Lear in his Illustrations of the Family of Psittacidae, or Parrots. Lear used the common name "Uniform parakeet" and coined the binomial name Platycercus unicolor. The species is now placed in the genus Cyanoramphus that was introduced in 1854 by the French ornithologist Charles Lucien Bonaparte.

Its closest relative is Reischek's parakeet, which also lives on the Antipodes Islands. Other relatives include the Norfolk parakeet, Society parakeet and Chatham parakeet.

It is the largest species in the genus Cyanoramphus at 30 cm (12 in) long. and makes a penetrating kok-kok-kok-kok noise. 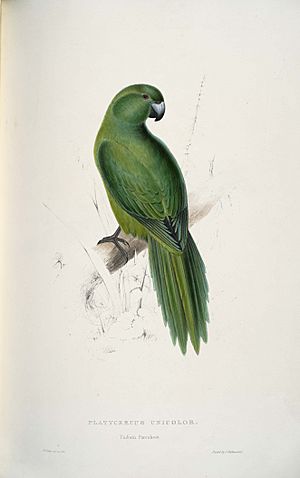 These parakeets eat leaves, buds, grass, and tussock stalks, as well as sometimes feeding on seeds, flowers, and will scavenge dead seabirds. The Antipodes parakeet also preys on grey-backed storm petrels, entering burrows to kill incubating adults, even digging at the entrance if it is too small.

Antipodes parakeets spend much of their time on the ground and in very small groups, in pairs or solitary.

They are quite inquisitive, territorial, probing and mischievous.

Their nest is in a tunnel 2 metres beneath the fibrous peat away from the wind.

The population is stable but conservation status is Vulnerable. The population is 2,000-3,000. Originally entirely restricted to the islands that bear their name there is now a small captive population, founded with less than 20 individuals, on the mainland.

All content from Kiddle encyclopedia articles (including the article images and facts) can be freely used under Attribution-ShareAlike license, unless stated otherwise. Cite this article:
Antipodes parakeet Facts for Kids. Kiddle Encyclopedia.