Stewart Island/Rakiura (commonly called Stewart Island) is the third-largest island of New Zealand. It lies 30 kilometres (19 mi) south of the South Island, across the Foveaux Strait. Its permanent population is 381 people as of the 2013 census, most of whom live in the settlement of Oban on the eastern side of the island. 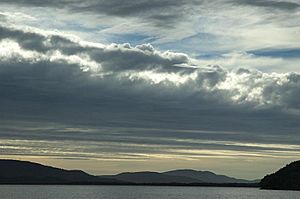 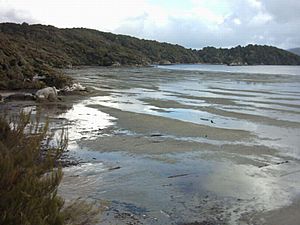 The original Māori name, Te Punga o Te Waka a Maui, positions Stewart Island/Rakiura firmly at the heart of Māori mythology. Translated as The Anchor Stone of Maui’s Canoe, it refers to the part played by the island in the legend of Maui and his crew, who from their canoe, the South Island, caught and raised the great fish, the North Island.

Rakiura is the more commonly known and used Māori name. It is usually translated as Glowing Skies, possibly a reference to the sunsets for which it is famous or for the aurora australis, the southern lights that are a phenomenon of southern latitudes.

For some, Rakiura is the abbreviated version of Te Rakiura a Te Rakitamau, translated as "great blush of Rakitamau", in reference to the latter's embarrassment when refused the hand in marriage of not one, but two daughters, of an island chief. According to Māori legend, a chief on the island named Te Rakitamau was married to a young woman who became terminally ill and implored him to marry her cousin after she died. Te Rakitamau paddled across Te Moana Tapokopoko a Tawhiki (Foveaux Strait) to the South Island where the cousin lived, only to discover she had recently married. He blushed with embarrassment; so the island was called Te Ura o Te Rakitamau.

Captain James Cook and his crew were the first Europeans to sight the island, in 1770, but Cook thought it was part of the South Island so named it South Cape. The island received its English name in honour of William W. Stewart, who was first officer on the ship Pegasus, which visited from Port Jackson (Sydney), Australia, in 1809 on a sealing expedition. Stewart charted the large southeastern harbour that now bears the ship's name (Port Pegasus), and determined the northern points of the island, proving that it was an island. He made three further visits to the island from the 1820s to the 1840s.

In 1841, the island was established as one of the three Provinces of New Zealand, and was named New Leinster. However, the province existed on paper only and was abolished after only five years, and with the passing of the New Zealand Constitution Act 1846 the province became part of New Munster, which entirely included the South Island. When New Munster was abolished in 1853, Stewart Island became part of Otago Province until 1861 when Southland Province split from Otago. In 1876 the provinces were abolished altogether.

For most of the twentieth century, "Stewart Island" was the official name, and that in common use by most New Zealanders. The name was officially altered to Stewart Island/Rakiura by the Ngai Tahu Claims Settlement Act 1998, one of many such changes under the Ngāi Tahu treaty settlement. 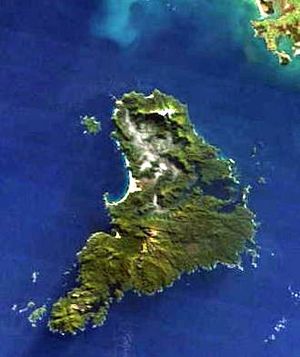 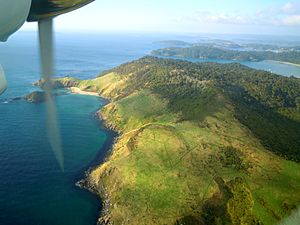 Northern part of Stewart Island, with a view over some of the bays 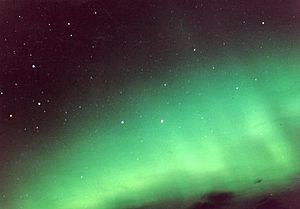 Stewart Island has an area of 1,680 square kilometres (650 sq mi). It is hilly and has a wet climate. The north is dominated by the swampy valley of the Freshwater River. The river rises close to the northwestern coast and flows southeastwards into the large indentation of Paterson Inlet. The highest peak is Mount Anglem (979 metres (3,212 ft)), close to the northern coast. It is one of a rim of ridges that surround Freshwater Valley.

The southern half is more uniformly undulating, rising to a ridge that runs south from the valley of the Rakeahua River, which also flows into Paterson Inlet. The southernmost point in this ridge is Mount Allen, at 750 metres (2,460 ft). In the southeast the land is somewhat lower, and is drained by the valleys of the Toitoi River, Lords River, and Heron River. South West Cape on this island is the southernmost point of the main islands of New Zealand.

Mason Bay, on the west side, is notable as a long sandy beach on an island where beaches are typically far more rugged. One suggestion is that the bay was formed in the aftershock of a meteorite impact in the Tasman Sea.

Three large and many small islands lie around the coast. Notable among these are Ruapuke Island, in Foveaux Strait 32 kilometres (20 mi) northeast of Oban; Codfish Island, close to the northwest shore; and Big South Cape Island, off the southwestern tip. The Titi/Muttonbird Islands group is between Stewart Island/Rakiura and Ruapuke Island, around Big South Cape Island, and off the southeastern coast. Other islands of interest include Bench Island, Native Island, and Ulva Island, all close to the mouth of Paterson Inlet, and Pearl Island, Anchorage Island, and Noble Island, close to Port Pegasus in the southwest. Further offshore The Snares are oceanic islands, a volcano and some smaller islets, that were never connected to the larger Stewart Island.

The climate of Stewart Island is mild for temperatures. However, one travel guide mentions "frequent downpours that make 'boots and waterproof clothing mandatory'", and another guide says that rainfall in Oban, the capital, is 1,600 to 1,800 mm (63 to 71 in) a year.

Owing to an anomaly in the magnetic latitude contours, this location is well placed for observing Aurora australis. 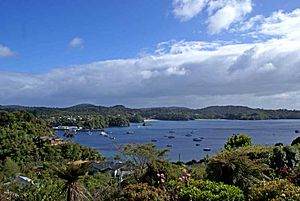 The only town is Oban, on Halfmoon Bay.

A previous settlement, Port Pegasus, once boasted several stores and a post office, and was located on the southern coast of the island. It is now uninhabited, and is accessible only by boat or by an arduous hike through the island. Another site of former settlement is at Port William, a four-hour walk around the north coast from Oban, where immigrants from the Shetland Islands settled in the early 1870s. This was unsuccessful, and the settlers left within one to two years, most for sawmilling villages elsewhere on the island.

Since 1988 the electricity supply on Stewart Island/Rakiura has come from diesel generators; previously residents used their own private generators. As a consequence electric power is around three times more expensive than on the South Island, at NZ$0.59/kWh in 2016. The Southland District Council has partnered with Meridian Energy to develop renewable energy sources for the island, and experiments with photovoltaic and wind generation are in progress.

Although the clay soil is not very fertile, the high rainfall and warm weather mean that the island is densely forested throughout. Native plants include the world's southernmost dense forest of podocarps (southern conifers) and hardwoods such as rātā and kāmahi in the lowland areas with mānuka shrubland at higher elevations. The trees are thought to have become established here since the last ice age from seeds brought across the strait by seabirds, which would explain why the beech trees that are so common in New Zealand, but whose seeds are dispersed by the wind rather than birds, are not found on Stewart Island.

Noeline Baker purchased land near Halfmoon Bay in the early 1930s, and with a checklist by botanist Leonard Cockayne populated it with all the local indigenous plants. She gifted the land and her house to the government in 1940, and today Moturau Moana is New Zealand's southernmost public garden.

There are many species of birds on Stewart Island/Rakiura that have been able to continue to thrive because of the relative absence of the cats, rats, stoats, ferrets, weasels and other predators that humans brought to the main islands. There are even more species of birds, including huge colonies of sooty shearwater and other seabirds, on The Snares and the other smaller islands offshore. The birds of Stewart Island include weka, kākā, albatross, the flightless Stewart Island kiwi, silvereyes, fantails, and kererū. The endangered yellow-eyed penguin has a significant number of breeding sites here while the large colonies of sooty shearwaters on the offshore Muttonbird Islands, are subject to muttonbirding, a sustainable harvesting program managed by Rakiura Māori. Meanwhile, a small population of the kakapo, a flightless parrot which is very close to extinction, was found on Stewart Island in 1977 and the birds subsequently moved to smaller islands (Codfish Island) for protection from feral cats. The South Island saddleback is similarly preserved.

As the island has always been sparsely populated and there has never been very much logging, much of the original wildlife is intact, including species that have been devastated on the larger islands to the north since their habitation by humans. However, although habitats and wildlife were not threatened by invasive species historically, now there are populations of cats, rats and brushtail possums on the island, as well as a large population of white-tailed deer, which are hunted for meat and sport, introduced to coastal areas. There is also a small population of red deer confined to the inland areas. Almost all the island is owned by the New Zealand government and over 80 per cent of the island is set aside as the Rakiura National Park, New Zealand's newest national park. Many of the small offshore islands, including the Snares, are also protected.

Residents of Stewart Island/Rakiura have held a number of promotional fundraising mock events regarding a declaration of independence for the island and to have it renamed to its original name of "Rakiura".

In the late 1950s or early 1960s they had a local printer overprint “INDEPENDENT RAKIURA” on eight values of some earlier New Zealand postage and health stamps. There were also eight different values from one penny to £1 overprinted on these stamps as well as having their original values blotted out with small black circles. These were sold to collectors with the proceeds helping to refurbish the Rakiura Museum.

There was another fundraising effort to raise NZ$6,000 for a new swimming pool for the island's school, by selling 50-cent passports for the newly "independent" island. A mock ceremony featured a declaration of independence on 31 July 1970 when the new republic's flag was unveiled.

These efforts were not serious attempts for independence, and Stewart Island/Rakiura remains a part of the New Zealand state.

All content from Kiddle encyclopedia articles (including the article images and facts) can be freely used under Attribution-ShareAlike license, unless stated otherwise. Cite this article:
Stewart Island Facts for Kids. Kiddle Encyclopedia.