The New Zealand kaka (Māori: kākā) (Nestor meridionalis) is a large species of parrot of the family Nestoridae found in native forests of New Zealand. Two subspecies are recognised. It is endangered and has disappeared from much of its former range.

The genus Nestor contains four species: the New Zealand kaka (Nestor meridionalis), the kea (N. notabilis), the extinct Norfolk kaka (N. productus), and the extinct Chatham kaka (N. chathamensis). All four are thought to stem from a "proto-kaka", dwelling in the forests of New Zealand five million years ago. Their closest relative is the kakapo (Strigops habroptilus). Together, they form the parrot superfamily Strigopoidea, an ancient group that split off from all other Psittacidae before their radiation. 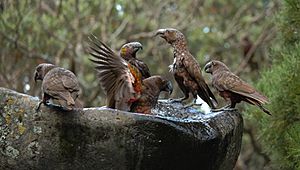 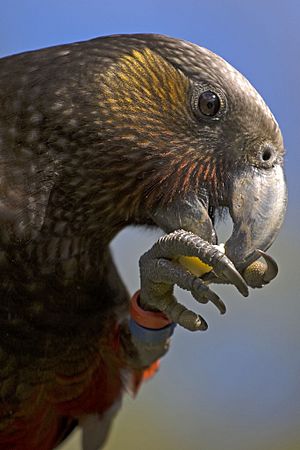 The New Zealand kaka, like many parrots, uses its feet to hold its food

The New Zealand kaka is a medium-sized parrot, measuring 45 cm (18 in) in length and weighing from 390 to 560 g (14 to 20 oz), with an average of 452 g (0.996 lb). It is closely related to the kea, but has darker plumage and is more arboreal. The forehead and crown are greyish white and the nape is greyish brown. The neck and abdomen are more reddish, while the wings are more brownish. Both sub-species have a strongly patterned brown/green/grey plumage with orange and scarlet flashes under the wings; colour variants which show red to yellow colouration especially on the breast are sometimes found.

This group of parrots is unusual, retaining more primitive features lost in most other parrots because it split off from the rest around 100 million years ago.

The calls include a harsh ka-aa and a whistling u-wiia.

The New Zealand kaka lives in lowland and mid-altitude native forest. Its strongholds are currently the offshore reserves of Kapiti Island, Codfish Island and Little Barrier Island. It is breeding rapidly in the mainland island sanctuary at Zealandia with over 800 birds banded since their reintroduction in 2002. From their reintroduction in 2002 the North Island kaka continue to re-colonise Wellington and a 2015 report showed a significant increase in their numbers over the preceding 12 years. 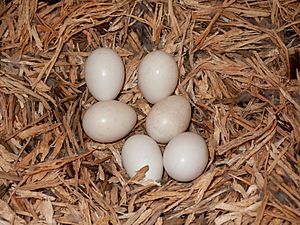 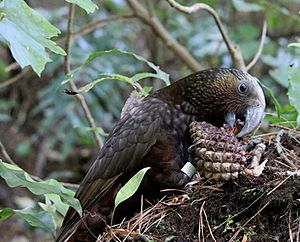 Kaka enjoy dismantling pine cones to eat the seeds inside. 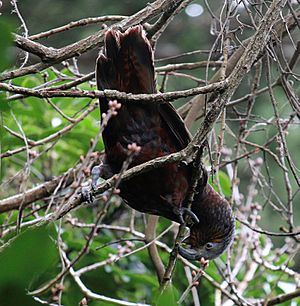 Kaka are mainly arboreal and occupy mid-to-high canopy. They are often seen flying across valleys or calling from the top of emergent trees. They are very gregarious and move in large flocks that often include kea, where they are present.

The New Zealand kaka nests in cavities in hollow trees. The entrance hole is often three to six metres above the ground, but can be as low as ground level on predator-free offshore islands. The nest floor is lined with small wood chips and powder. They lay eggs any time between September (late winter) and March (summer). Occasionally, in a good fruiting year, a pair can double clutch, often utilising the same nest hole for the second clutch and extending breeding into winter. They typically lay four eggs, though it can be up to eight, with two chicks fledging. Only the female incubates the eggs, for about 24 days, and cares for the nestlings, but she is regularly fed by the male throughout breeding. Both parents feed the chicks after they have fledged. 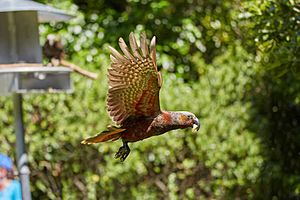 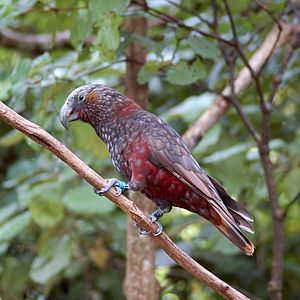 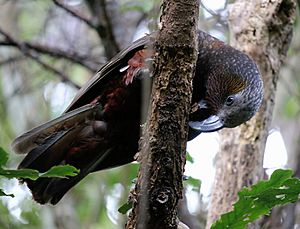 Kaka drilling in to get tree sap 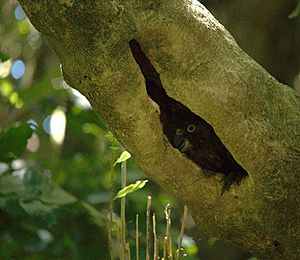 Fledgling in a nest in the Wellington Botanic Gardens 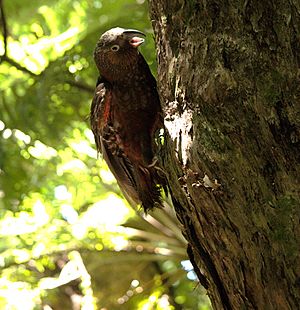 Fledgling climbing a tree in the Wellington Botanic Gardens 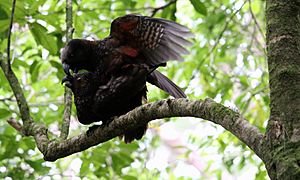 The New Zealand kaka is considered endangered (CITES II). It has greatly declined across its traditional range as a result of habitat loss, predation by introduced predators such as cats, rats, possums and stoats, and competition from wasps and bees for the honeydew excreted by scale insects. A closely related species, Nestor productus, the Norfolk kaka, became extinct in 1851 for similar reasons.

Predatory mammals are responsible for the loss of an estimated 26 million native birds and their eggs each year in New Zealand.

As cavity nesters with a long incubation period that requires the mother to stay on the nest for at least 90 days, kaka are particularly vulnerable to predation. Stoats were the main cause of death of nesting adult females, nestlings and fledglings, but possums were also important predators of adult females, eggs and nestlings. There is strong evidence that predation of chicks and females has led to a serious age and sex imbalance, even amongst ostensibly healthy populations.

In parts of the country, the Department of Conservation and local conservation groups have attempted to control predators of kaka through the use of traps, ground baiting and the aerial deployment of sodium fluoroacetate (1080). Where pest control has been carried out, there has been significant recovery of kaka populations. For example, in Pureora Forest Park 20 kaka were radio-tracked in an area to be treated with aerial 1080 in 2001. In nearby Waimanoa Forest, which was not to be treated with 1080, nine kaka were radio-tracked. In the area where 1080 was used, all 20 birds survived that season. Of the nine birds tagged in the untreated area, five were killed by predators that same season.

Research has shown that honeydew is very important for breeding birds, especially those breeding in southern beech forests. The difficult nature of controlling the wasps makes the New Zealand kaka's future very uncertain.

The increase in the population of North Island kaka in Wellington has led to birds visiting residential gardens and reserves and this in turn has led to more interactions with people. People have been feeding the birds unsuitable food such as nuts, various grains and cheese. Feeding kaka has resulted in metabolic bone disease in kaka chicks. In 2016 80% of the kaka chicks being monitored by the Wellington City Council died from this disease. There have also been instances of kaka nesting in the roofs of houses.

All content from Kiddle encyclopedia articles (including the article images and facts) can be freely used under Attribution-ShareAlike license, unless stated otherwise. Cite this article:
New Zealand kaka Facts for Kids. Kiddle Encyclopedia.