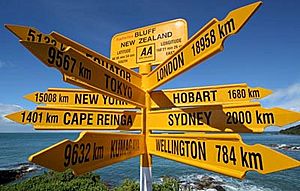 Bluff, previously known as Campbelltown, is a town and seaport in the Southland region, on the southern coast of the South Island of New Zealand. It is the southern-most town in New Zealand (excluding Oban) and, despite Slope Point and Stewart Island being further to the south, is colloquially used to refer to the southern extremity of the country (particularly in the phrase "from Cape Reinga to The Bluff"). According to the 2006 census, the resident population was 1,850, a decrease of 85 since 2001.

The Bluff area was one of the earliest areas of New Zealand where a European presence became established. The first ship known to have entered the harbour was the Perseverance in 1813, in search of flax trading possibilities, with the first European settlers arriving in 1823 or 1824. This is the foundation for the claim that Bluff is the oldest permanent European settlement in the country. However, the missionary settlement at Kerikeri was both earlier and larger. The town was officially called Campbelltown in 1856, became a borough in 1878, and was renamed Bluff in 1917. 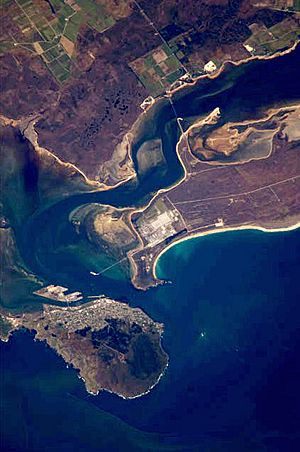 Bluff is 30 km (20 mi) by road from Invercargill, and the southern terminus of the Bluff Branch, the continuation from Invercargill of the Main South Line. This was one of New Zealand's earliest railways, opening on 5 February 1867.

Bluff is at the end of a peninsula that forms the western side of Bluff Harbour and Awarua Bay, with the port located in the relatively narrow entrance channel. It is on State Highway 1, which terminates one kilometre to the south of the town at Stirling Point. At Stirling Point there is a signpost showing the distance and direction to various major cities and locations around the world, including the Equator and the South Pole.

Bluff is dominated by Bluff Hill / Motupohue (standing at 265 m (870 ft)), which provides some shelter from the prevailing westerly winds. There is a world-class walk along the shore through native bush up to this point. The town is named for this bluff, which was known to early whalers as Old Man's Bluff or Old Man Bluff. East across the entry channel from Bluff is Tiwai Point, home to New Zealand's only aluminium smelter and its wharf. Electricity is supplied by the Manapouri Power Station in Fiordland National Park.

A chain sculpture on the coast near Bluff symbolises the Maori view that Stewart Island is anchored to South Island; a similar sculpture in Rakiura National Park represents the other end of the chain.

South Port is the port operating company of the Port of Bluff, and is owned to 66.5% by the Southland Regional Council. A small port in comparison with New Zealand giants like Ports of Auckland or Port of Tauranga, it moves around 2.2 million tonnes of cargo each year, mostly New Zealand coastal reshipment. It is hoped that the Tiwai Point aluminium smelter and fossil fuel exploration activity in the Great South Basin will help to ensure the future relevance of the port. A recent (2008) weekly container ship service also lifted the volumes.

Bluff Harbour is also the terminus for the twice-daily catamaran ferry to Stewart Island / Rakiura, 60 kilometres (37 mi) south across Foveaux Strait. It is the main gateway for NZ ships heading down to the Antarctic. The harbour is also home to the Foveaux Strait oyster fleet. Bluff oysters are renowned for their succulence and flavour, and are considered a delicacy nationwide, with Bluff holding an annual oyster festival. The oyster quota was severely reduced during the 1990s due to the effects of the toxic protozoan parasite Bonamia exitiosa upon the oyster beds. 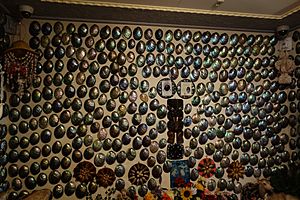 Among the attractions of the town was the Paua House, created by Fred and Myrtle Flutey. This was an ordinary bungalow transformed by having the outside walls totally covered in paua shells. The interior was also extensively decorated with paua and there is an extensive collection of (often kitsch) paua-decorated ornaments, utensils and trinkets. The house became a museum after the death of the owners, but was sold and in March 2007 the exhibits removed to Christchurch. It has been on permanent display at the Canterbury Museum since July 2008.

Panorama from the summit of Bluff Hill. The Bluff port is in the centre, and the aluminium smelter in the mid-distance in the centre-right

All content from Kiddle encyclopedia articles (including the article images and facts) can be freely used under Attribution-ShareAlike license, unless stated otherwise. Cite this article:
Bluff, New Zealand Facts for Kids. Kiddle Encyclopedia.