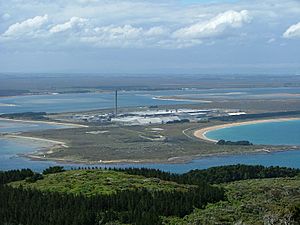 The facility, New Zealand's only aluminium smelter, is at Tiwai Point, near Bluff. It imports alumina and processes it into primary aluminium. The plant's alumina is supplied from refineries in Queensland and the Northern Territory of Australia. Around 90 per cent of the aluminium produced at NZAS is exported, mainly to Japan.

The smelter was opened in 1971 following the construction of the Manapouri Power Station by the New Zealand government to supply it with electricity. It uses 13 percent of New Zealand's electricity, and is reported to account for 10 percent of the Southland region's economy.

In 1955, a geologist working for Consolidated Zinc Proprietary Ltd (ConZinc) identified a commercial deposit of bauxite in Australia on the west coast of Cape York Peninsula. The company investigated sources of large quantities of cheap electricity needed to reduce the alumina recovered from the bauxite into aluminium. In 1960, ConZinc reached an agreement with the government for it to build a smelter and power station using the hydroelectric capacity of Lake Manapouri and Lake Te Anau. In 1963, ConZinc decided not to build the power station, and following that decision the government decided to construct it, with power first being generated in 1969. Construction of the Manapouri Power Station attracted controversy for its environmental effects, with over 264,000 New Zealanders signing the Save Manapouri petition. With a supply of electricity to be available, ConZinc built the Tiwai Point smelter, opening in 1971. The original ownership was 50% Comalco, 25% Sumitomo Chemical Company and 25% Showa Denko KK.

Tiwai Point is the only aluminium smelter in New Zealand. In December 1980, the government announced a project that would build a second smelter at Aramoana, but opposition from the public, changes in the aluminium market, and the loss of a commercial partner meant the project did not go ahead.

The smelter uses the Hall–Héroult process to convert alumina (aluminium oxide) to elemental aluminium. Bauxite is mined in Australia and refined into alumina before being shipped to New Zealand. The smelter consists of three lines of P69 technology cells, with 208 cells each (i.e. 624 total), and one line of 48 CD200 technology cells. The third P69 Line was built in the early 1980s as part of the Muldoon government's "Think Big" projects.

The smelter produces the world's purest aluminium – 99.98 percent pure – and is one of two smelters in the world producing ultrahigh purity aluminium. In 2011 the smelter produced 354,030 saleable tonnes of aluminium, which was its highest ever output at the time. In 2015, it produced 335,290 tonnes.

Taken from the Statistical Review of Comalco's New Zealand Activities, page 22 of the 1993 Annual Report.

The smelter production is in tonnes of saleable metal, the aluminium price is the average London Metal Exchange 3 month in US$/tonne, the Nett Profit/Loss is after tax and NZ$. The employee count includes contract employees and the full-time equivalent of part-time employees. Comalco-CHH Aluminium employees are not included from 1990; 425 were employed in 1993.

New Zealand Aluminium Smelters has a contract for electricity supply with Meridian Energy for the continuous supply of 572 megawatts for the period 2013 to 2030. A variation of this agreement was signed in 2015.

Economic effects and threats of closure

NZAS reports that the facility employs 800 full-time employees and contractors and indirectly creates jobs for 3,000 people. The smelter is reported to account for 10 percent of the Southland region's economy.

Tiwai Point has frequently operated at a loss, such as in 2012 when it lost $548 million. Analysts have commented that the profitability of the smelter is most dependent on prices for electricity, alumina and the finished aluminium as well as the New Zealand dollar. Between 2008 and 2013, aluminium prices fell by more than 30 percent. Rio Tinto threatened to close the Tiwai Point smelter if it could not get a cheaper deal for electricity from retailer Meridian, or the Government failed to give it a substantial subsidy to cover losses.

In 2013, Rio Tinto threatened to shut down the loss-making Tiwai Point smelter, unless it was able to continue re-negotiating favourable electricity prices with Meridian Energy. Meridian is one of several state-owned enterprises which was proposed for a partial float on the sharemarket by the John Key National Government. The government wanted to get the maximum possible sale price, which would potentially conflict with Rio Tinto's desire for low electricity prices. As a result, the Government announced it would subsidise Rio Tinto to keep the Tiwai Point smelter operating in the short term, garnering criticism from business commentators and opposition politicians. However, on 2 April 2013, John Key said Rio Tinto had rejected the Government's offer, preferring a "longer-term deal than the Government was prepared to offer". John Key stated that if the smelter can't sustain itself financially, the government wasn't interested in keeping it open long-term.

Much media commentary in April 2013 focused on the impact of closure on both domestic power prices and share prices when the State Owned Enterprise and electricity generator Mighty River Power would be partially sold off to private investors. NZAS produced a report which claimed that if the smelter closed, there would be a permanent loss to Southland's GDP of about 7-8 percent and that 2-3 percent of Southland's population could move out of the region. Invercargill mayor Tim Shadbolt said it was a myth that closing the smelter would result in lower prices, and vowed to keep it open.

In August 2013, the New Zealand government agreed to make a $30 million payment to NZAS as a deal to support the smelter and to save jobs, exchange for agreeing the smelter cannot be closed before January 2017. Finance Minister Bill English said the Government would make no further contribution to support it, which he reiterated in 2015 following speculation that Rio Tinto was seeking to sell the smelter.

In 2016, an analyst First New Zealand Capital (FCNZ) utilities said that the smelter was thought to be breaking even, and that favourable currency rates and low alumina prices were helping matters.

In October 2019, Rio Tinto announced that it was undertaking a strategic review of the Tiwai Point Aluminium Smelter, including a wide range of issues associated with closure. The NZAS chief executive Stew Hamilton said that they had been losing money for the last 12 months, and that options ranged from operating at the status quo, which would require cheaper power, to closure of the plant.

During New Zealand's lockdown for the Covid-19 pandemic, the smelter was deemed an essential service and exempt from restrictions.

On 31 March 2020, Rio Tinto announced that it would close potline four, to ensure it can cope with the restrictions at the plant that are needed because of the coronavirus pandemic. Potline 4 originally opened in 1996 but was turned off for six years between 2012 and 2018 before reopening as a result of an uptick in aluminium prices and a new deal with power supplier Meridian. Potline four is smaller than the smelter's other three potlines, producing about 31,000 tonnes of aluminium a year, or about 9 per cent of the smelter's total output, and consumes about 50 MW of electricity.

On 9 July 2020, Rio Tinto announced that the smelter would close. The company said that it would wind down operations and end New Zealand Aluminium Smelters Limited after a strategic review that "showed the business is no longer viable given high energy costs and a challenging outlook for the aluminium industry". The company stated that 1000 jobs would be directly lost from the closure, and 1600 jobs indirectly connected to the smelter would also be under threat. The decision followed a 25% decrease in aluminium prices over the prior 18 months, and increasing power costs. Rio Tinto intended to close the smelter in August 2021.

The smelter featured in the 2020 general election, with many parties pledging to keep – or try to keep – the smelter running for at least some time. The National Party announced that, if it won the election, it would keep the smelter running for at least five years and would facilitate negotiations between Rio Tinto, power companies and Transpower to achieve a more cost-competitive environment. New Zealand First leader Winston Peters said that keeping the smelter open would be a bottom line in any coalition negotiations, and that he had a 20-year plan for the smelter. The Government ruled out any further bailouts of the company. Prime Minister and Labour leader Jacinda Ardern initially said that a Government project to widen the Homer Tunnel would provide some local jobs, but that no one industry could offset the job losses. Later, Labour announced that it would negotiate to extend the life of the smelter by three to five years if elected, seeking to protect jobs in the short term to provide time for the community to consider alternative options. Gore District Mayor Tracy Hicks has been lobbying the Government preserve the smelter in some way.

All content from Kiddle encyclopedia articles (including the article images and facts) can be freely used under Attribution-ShareAlike license, unless stated otherwise. Cite this article:
Tiwai Point Aluminium Smelter Facts for Kids. Kiddle Encyclopedia.