Key was born in Auckland, New Zealand, to George Key (1914–1969) and Ruth Key (née Lazar; 1922–2000), on 9 August 1961. His father was an English immigrant and a veteran of the Spanish Civil War and World War II. Key and his two sisters were raised in a state house in the Christchurch suburb of Bryndwr, by his mother, an Austrian Jewish immigrant. Key is the third prime minister or premier of New Zealand to have Jewish ancestry, after Julius Vogel and Francis Bell.

He attended Aorangi School, and then Burnside High School from 1975 to 1979, where he met his wife, Bronagh. He went on to attend the University of Canterbury and earned a Bachelor of Commerce degree in Accounting in 1981. He also attended management studies courses at Harvard University. 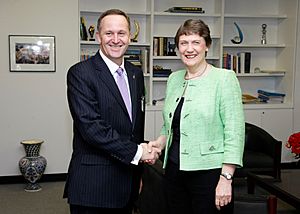 Key with his predecessor, Helen Clark

Key's first job was in 1982, as an auditor at McCulloch Menzies, and he then moved to be a project manager at Christchurch-based clothing manufacturer Lane Walker Rudkin for two years. Key began working as a foreign exchange dealer at Elders Finance in Wellington, and rose to the position of head foreign exchange trader two years later, then moved to Auckland-based Bankers Trust in 1988.

In 1995, he joined Merrill Lynch as head of Asian foreign exchange in Singapore. That same year he was promoted to Merrill's global head of foreign exchange, based in London, where he may have earned around US$2.25 million a year including bonuses, which is about NZ$5 million at 2001 exchange rates. Some co-workers called him "the smiling assassin" for maintaining his usual cheerfulness while sacking dozens (some say hundreds) of staff after heavy losses from the 1998 Russian financial crisis. He was a member of the Foreign Exchange Committee of the New York Federal Reserve Bank from 1999 to 2001.

In 1998, on learning of his interest in pursuing a political career, the National Party president John Slater began working actively to recruit him. Former party leader Jenny Shipley describes him as one of the people she "deliberately sought out and put my head on the line–either privately or publicly–to get them in there". 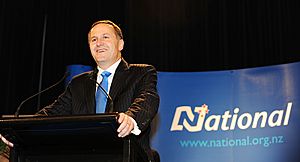 Key after winning the 2008 election

Key entered the New Zealand Parliament representing the Auckland electorate of Helensville as one of the few new National members of parliament in the election of 2002 following National's significant defeat of that year. In 2004, he was appointed Finance Spokesman for National and eventually succeeded Don Brash as the National Party Leader in 2006. After two years as Leader of the Opposition, Key led his party to victory at the November 2008 general election, and repeated this feat at both the November 2011 and September 2014 elections. He was expected to lead National into the 2017 election, but on 5 December 2016 announced that he would resign as Prime Minister and leader of the National Party. He was succeeded by Bill English on 12 December 2016.

As Prime Minister, Key led the Fifth National Government of New Zealand which entered government at the beginning of the late-2000s recession in 2008. In his first term, Key's government implemented a GST rise and personal tax cuts. In February 2011, a major earthquake in Christchurch, the nation's second largest city, significantly affected the national economy and the government formed the Canterbury Earthquake Recovery Authority in response. In its second term, Key's government announced a policy of partial privatisation of five state-owned enterprises; while the policy was enacted, voters in a citizens-initiated referendum on the issue were 2 to 1 opposed to the policy. In foreign policy, Key announced the withdrawal of New Zealand Defence Force personnel from their deployment in the war in Afghanistan, signed the Wellington Declaration with the United States and pushed for more nations to join the Trans-Pacific Partnership. 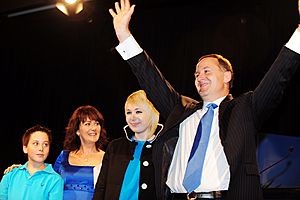 Key with his wife and two children

Key was born in Auckland, New Zealand, to George Key and Ruth Key. His father, who was from the UK, died of a heart attack in 1967. Key and his two sisters were raised in a state house in Christchurch by his mother.

He attended Burnside High School, and earned a Bachelor of Commerce degree in accounting from the University of Canterbury in 1981. He has attended management studies courses at Harvard University, although he did not receive a degree from this institution.

Key met his wife Bronagh when they were both students at Burnside High School. They married in 1984. She is currently full-time mother of their two children.

All content from Kiddle encyclopedia articles (including the article images and facts) can be freely used under Attribution-ShareAlike license, unless stated otherwise. Cite this article:
John Key Facts for Kids. Kiddle Encyclopedia.