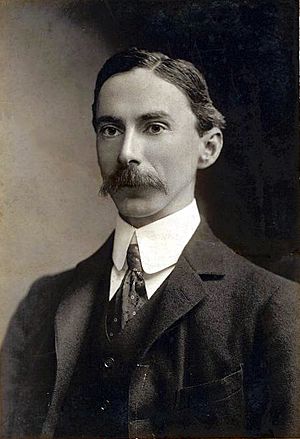 Bertrand Russell was a famous agnostic. This photograph shows him in 1907

Thomas Henry Huxley, the English biologist, coined the word "agnostic" in 1869. In 1889 he wrote "Agnosticism... is not a creed, but a method... the fundamental axiom of modern science... In matters of the intellect, do not pretend that conclusions are certain which are not demonstrated or demonstrable".

There are several different kinds of agnosticism:

People often have difficulty telling agnosticism and atheism apart. Atheists do not believe in the existence of deities, and some say that they are sure that no deity exists. Some (perhaps most) atheists, though, say that it is up to theists (people who believe in a deity) to give the evidence for a god or to show why someone should believe in a god. They state that there is neither enough evidence nor a strong enough argument to believe any gods exist, and so they reject belief that any exist. While agnostics think we cannot know for sure whether any deities exist, some agnostics do believe at least one deity exists. These people are both agnostic and theistic—they believe at least one deity exists, but do not claim to know that to be true. Some people are both atheist and agnostic—they reject belief in any deities without claiming to know that deities do not exist. Some agnostics just cannot themselves decide whether to believe any deities exist or not.

All content from Kiddle encyclopedia articles (including the article images and facts) can be freely used under Attribution-ShareAlike license, unless stated otherwise. Cite this article:
Agnosticism Facts for Kids. Kiddle Encyclopedia.