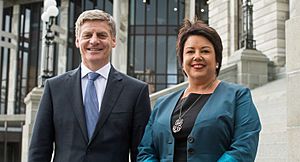 Leader Bill English with his deputy, Paula Bennett on the steps of Parliament

The New Zealand National Party is a centre-right political party in New Zealand. It was formed in 1936 when the United Party and the Reform Party merged together. It is one of the two major parties in New Zealand politics (the other is the Labour Party). Since the 2017 general election, the National Party has been the opposition party.

The current leader of the National Party is Simon Bridges.

All content from Kiddle encyclopedia articles (including the article images and facts) can be freely used under Attribution-ShareAlike license, unless stated otherwise. Cite this article:
New Zealand National Party Facts for Kids. Kiddle Encyclopedia.