The politics of New Zealand function within a framework of a unitary parliamentary representative democracy. New Zealand is a constitutional monarchy in which a hereditary monarch—since 6 February 1952, Queen Elizabeth II—is the sovereign and head of state.

The country has a multi-party system in which many of its legislative practices derive from the unwritten conventions of and precedents set by the United Kingdom's Westminster Parliament. However, New Zealand has evolved variations; minority governments are common and typically dependent on confidence and supply agreements with other parties. The two dominant political parties in New Zealand have historically been the New Zealand Labour Party and the New Zealand National Party (or its predecessors).

New Zealand has no formal codified constitution; the constitutional framework consists of a mixture of various documents (including certain acts of the United Kingdom and New Zealand Parliaments), the Treaty of Waitangi and constitutional conventions. The Constitution Act in 1852 established the system of government and these were later consolidated in 1986. Constitutional rights are protected under common law and are strengthened by the Bill of Rights Act 1990 and Human Rights Act 1993, although these are not entrenched and can be overturned by Parliament with a simple majority. The Constitution Act describes the three branches of Government in New Zealand: The Executive (the Sovereign and Cabinet), the legislature (Parliament) and the judiciary (Courts). 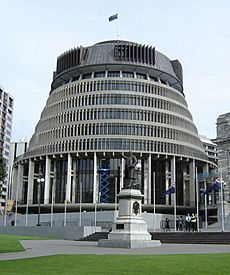 The "Beehive" is the headquarters of the New Zealand Government 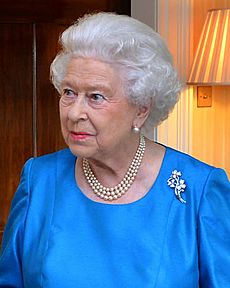 New Zealand has a constitutional (or limited) monarchy: the Queen and the Governor-General follow the advice of the government and play only a formal role in the executive, except with respect to the formation of governments and the use of reserve powers. 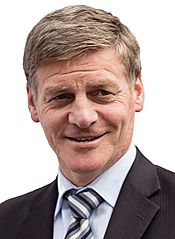 Cabinet is the most senior policy-making body and is led by the Prime Minister, who is also, by convention, the parliamentary leader of the governing party or coalition, and is known as the head of government. The prime minister, being the de facto leader of New Zealand, exercises executive functions that are nominally vested in the sovereign (by way of the Royal prerogatives). Cabinet is directly responsible to the New Zealand Parliament, from which its members are derived; all cabinet ministers must be members of parliament (MPs) and are collectively responsible to it.

General elections are held every three years, with the last one in September 2014. National won the 2008 election ending nine years of Labour-led government. Former National leader John Key formed a minority government, negotiating agreements with the ACT party, the United Future party and the Māori Party. The leaders of each of these parties hold ministerial posts but remain outside of cabinet. There are currently three parties in opposition; the Labour Party, the Green Party, and New Zealand First. The leader of the opposition is Andrew Little, who is Leader of the Labour Party.

The first political party in New Zealand was founded in 1891, and its main rival was founded in 1909—from that point until a change of electoral system in 1996, New Zealand had a de facto two-party system. As of 2014[update] New Zealand has a genuinely multi-party system, with eight parties represented in Parliament. No party has been able to govern without support from other groups since 1996, making coalition government standard.

Prior to New Zealand becoming a British colony in 1840, politics in New Zealand was dominated by Māori chiefs as leaders of hapu and iwi, utilising Māori customs as a political system.

After the 1840 Treaty of Waitangi, a colonial Governor and his small staff acted on behalf of the British government based on the British political system. Whereas Māori systems had dominated prior to 1840 governors attempting to introduce British systems met with mixed success in Māori communities. More isolated Māori were little influenced by the government. Most influences were felt in and around Russell, the first capital and Auckland, the second capital.

The first voting rights in New Zealand were legislated in 1852 as the New Zealand Constitution Act for the 1853 elections and reflected British practice. Initially only property owners could vote, but by the late 1850s 75% of British males over 21 were eligible to vote compared to 20% in England and 12% in Scotland. Around 100 Māori chiefs voted in the 1853 election.

During the 1850s provincial-based government was the norm. It was abolished in 1876. Politics was initially dominated by conservative and wealthy "wool lords" who owned multiple sheep farms, mainly in Canterbury. During the gold rush era starting 1858 suffrage was extended to all British gold miners who owned a 1-pound mining license. The conservatives had been influenced by the militant action of gold miners in Victoria at Eureka. Many gold miners had moved to the New Zealand fields bringing their radical ideas. The extended franchise was modelled on the Victorian system. In 1863 the mining franchise was extended to goldfield business owners. By 1873 of the 41,500 registered voters 47% were gold field miners or owners.

After the brief Land War period ending in 1864, Parliament moved to extend the franchise to more Māori. Donald McLean introduced a bill for four temporary Māori electorates and extended the franchise to all Māori men over 21 in 1867. As such, Māori were universally franchised 12 years prior to European men. In the 1870s ex gold miner,newspaper editor and radical freetrader Julius Vogel, the colonial treasurer, embarked on a massive capital loans expansion scheme that hugely improved the nation's infrastructure. Money was mainly spent on roads, bridges, railways, port facilities and lighthouses.

In 1879 an economic depression hit, resulting in poverty and many people, especially miners, returning to Australia. Between 1879 and 1881 government was concerned at the activities of Māori activists based on confiscated land at Parihaka. Activists destroyed settlers farm fences and ploughed up roads and land which incensed local farmers. Arrests followed but the activities persisted. Fears grew among settlers that the resistance campaign was a prelude to armed conflict. The government itself was puzzled as to why the land had been confiscated and offered a huge 25,000 acre reserve to the activists, provided they stopped the destruction. Commissioners set up to investigate the issue said that the activities "could fairly be called hostile". A power struggle ensued resulting in the arrest of all the prominent leaders by a large government force in 1881. Historian Hazel Riseborogh describes the event as a conflict over who had authority or mana-the government or the Parihaka protestors. 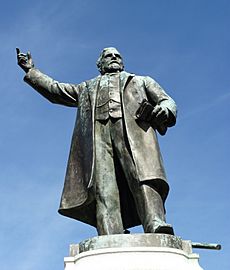 In 1882 the export of meat in the first refrigerated ship started a period of sustained economic export led growth. This period is notable for the influence of new social ideas and movements such as the Fabians and the creation in 1890 of the first political party, the Liberals. Their leader, former gold miner Richard Seddon from Lancashire, was Premier from 1893 to 1906. The Liberals introduced new taxes to break the influence of the wealthy conservative sheep farm owners. They also purchased more land from Māori. In 1896 Maori made up 2.9% of the population but owned 15% of the land. Far more small farms and a new land owning class were created during this period.

Women's suffrage was granted after about two decades of campaigning by women such as Kate Sheppard and Mary Ann Müller and organisations such as the New Zealand branch of the Women's Christian Temperance Union. On 19 September 1893 the governor, Lord Glasgow, signed a new Electoral Act into law. As a result, New Zealand became the first self-governing nation in the world in which all women had the right to vote in parliamentary elections. Women first voted in the 1893 election, with a high 85% turnout (compared to 70% of men).

Women were not eligible to be elected to the House of Representatives until 1919 though, when three women, including Ellen Melville stood. The first woman to win an election (to the seat held by her late husband) was Elizabeth McCombs in 1933. Mabel Howard became the first female cabinet minister in 1947, being appointed to the First Labour Government.

New Zealand was the first country in the world in which all the highest offices were occupied by women, between March 2005 and August 2006: the Sovereign Queen Elizabeth II of New Zealand, Governor-General Dame Silvia Cartwright, Prime Minister Helen Clark, Speaker of the New Zealand House of Representatives Margaret Wilson and Chief Justice Dame Sian Elias.

The right-leaning National Party and the left-leaning Labour Party have dominated New Zealand political life since a Labour government came to power in 1935. During fourteen years in office (1935–1949), the Labour Party implemented a broad array of social and economic legislation, including comprehensive social security, a large scale public works programme, a forty-hour working week, a minimum basic wage, and compulsory unionism. The National Party won control of the government in 1949 and adopted many welfare measures instituted by the Labour Party. Except for two brief periods of Labour governments in 1957-1960 and 1972–1975, National held power until 1984.

After regaining control in 1984, the Labour government instituted a series of radical market-oriented reforms in response to New Zealand's mounting external debt. It also enacted anti-nuclear legislation that effectively brought about New Zealand's suspension from the ANZUS security alliance with the United States and Australia, and instituted a number of other more left-wing reforms, such as allowing the Waitangi Tribunal to hear claims of breaches of the Treaty of Waitangi to be made back to 1840, reinstituting compulsory unionism and creating new government agencies to implement a social and environmental reform agenda (women's affairs, youth affairs, Pacific Island affairs, consumer affairs, Minister for the Environment).

In October 1990, the National Party again formed a government, for the first of three three-year terms. In 1996, New Zealand inaugurated the new electoral system, Mixed Member Proportional (MMP) to elect its Parliament. The system was expected (among numerous other goals) to increase representation of smaller parties in Parliament and appears to have done so in the MMP elections to date. Since 1996, neither National nor Labour has had an absolute majority in Parliament, and for all but two of those years a minority government has ruled. In 1995 Georgina Beyer became the world's first openly transsexual mayor, and in 1999 she became the world's first openly transsexual Member of Parliament.

After nine years in office, the National Party lost the November 1999 election. Labour under Helen Clark out-polled National by 39% to 30% and formed a coalition, minority government with the left-wing Alliance. The government often relied on support from the Green Party to pass legislation.

The Labour Party retained power in the 27 July 2002 election, forming a coalition with Jim Anderton's new party, the Progressive Coalition, and reaching an agreement for support with the United Future party. Helen Clark remained Prime Minister.

After the general election in November 2008, the National Party moved quickly to form a minority government with the ACT Party, the Maori Party and United Future. This arrangement allowed National to decrease its reliance on the right-leaning ACT party, whose policies are sometimes controversial with the greater New Zealand public. In 2008, John Key became Prime Minister, with Bill English his deputy. This arrangement conformed to a tradition of having a north-south split in the major parties' leadership, as Key's residence is in Auckland and English's electorate is in the South Island. On 12 December 2016, English was elected Prime Minister by the National Party Caucus after Key's unexpected resignation a week earlier. Paula Bennett, (member for Upper Harbour) was elected Deputy Prime Minister, thus continuing the tradition.

All content from Kiddle encyclopedia articles (including the article images and facts) can be freely used under Attribution-ShareAlike license, unless stated otherwise. Cite this article:
Politics of New Zealand Facts for Kids. Kiddle Encyclopedia.