The Beehive is the common name for the Executive Wing of New Zealand Parliament Buildings, located at the corner of Molesworth Street and Lambton Quay, Wellington. It is so-called because its shape is reminiscent of that of a traditional woven form of beehive known as a "skep". It is registered as a Category I heritage building by Heritage New Zealand.

Construction began in 1969 and was completed in 1981. Since 1979 the building has housed the offices of the prime minister and other ministers. Thus, the name "Beehive" is closely linked with the New Zealand Government. It is often used as a metonym for the New Zealand leadership at large.

In the 1960s the government proposed an extension of Parliament House, which had only been partly built in 1922. Prime Minister Keith Holyoake had wanted to complete the original plan, but the government architect persuaded him to approve a modern building which would house parliamentary offices. In 1964, Scottish architect Sir Basil Spence provided the original conceptual design of a round building rising in steps. The detailed architectural design was undertaken by the New Zealand government architect Fergus Sheppard, and structural design of the building was undertaken by the Ministry of Works. W. M. Angus constructed the first stage, beginning in 1969 – the podium, underground car park and basement for a national civil defence centre. Gibson O'Connor constructed the ten floors of the remainder of the building. 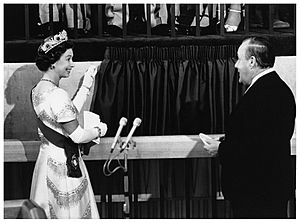 In the late 1990s there was consideration of moving the Beehive behind Parliament House, and finishing Parliament House according to the 1911 original plans. The plan was scuttled due to public outcry at the cost. Renovations were carried out and the interior was modernised between 1998 and 2006 to plans by Christchurch architecture firm Warren and Mahoney. In 2013 and 2014, the roof was repaired and windows replaced. 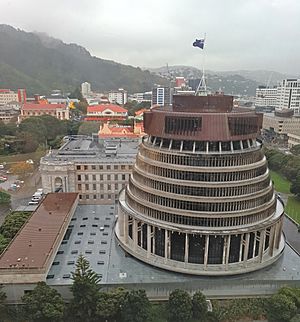 A view of the Beehive from above, showing the much larger structure at its base

The building is ten storeys (72 metres (236 ft)) high and has four floors below ground. The entrance foyer's core is decorated with marble floors, stainless steel mesh wall panels, and a translucent glass ceiling.

The Beehive's brown roof is made from 20 tonnes of hand-welted and seamed copper. It has developed a naturally weathered appearance. A tunnel runs under Bowen Street from The Beehive to parliamentary offices in Bowen House. The Beehive is extensively decorated with New Zealand art. On the inner wall of the Banquet Hall is a 42-metre-long 4.8-metre-high mural by John Drawbridge portraying the atmosphere and sky of New Zealand.

The Beehive's circular footprint (see rotunda) is generally considered an elegant and distinctive design feature. However it is also quite impractical, as many of its rooms are wedge-shaped, curved or asymmetrical. An extension has been built out the front to allow for a new security entrance. A new, bomb-proof mail delivery room has already been built at the rear of the building.

The Beehive has, since 1992, featured as part of the design of the New Zealand twenty-dollar note. A survey commissioned by the Reserve Bank of New Zealand found that the Beehive is "a New Zealand icon and as such is readily recognisable". 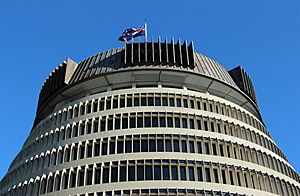 The top floor is occupied by the Cabinet room, with the prime minister's offices directly beneath on the ninth floor (and part of the eighth). The upper portion of the Beehive also contains the offices of other ministers; senior ministers are situated at proximity to the prime minister's office according to their ranking in Cabinet. The seniority of a minister is reflected in how far up the building they are. Some ministers, especially junior ministers, are instead based in Bowen House.

Other facilities within the building include function rooms and a banqueting hall on the first floor of the Beehive, which is the largest function room in the parliamentary complex. The parliamentary catering facilities of Bellamy’s include a bar known as Pickwicks or 3.2 (due to its position in the building on the third floor and second corridor), Copperfield's café, and the Member's and Member's and Guests restaurants. The building also houses, in its basement, the country's National Crisis Management Centre. The Beehive contains a theatrette, commonly used for government press conferences. Other facilities include a gym and a swimming pool. The parliament building is used by members of Parliament who hold meetings or are discussing bills or new laws.

The New Zealand Parliament's Visitor Centre, open most days from 9 am to 5 pm, is located on the ground floor of the Beehive. Free guided tours lasting up to one hour are available, as are educational visits for students.

Tours were suspended in 2020 to limit the spread of COVID-19. The public gallery and select committee meetings remained open to the public, subject to review.

All content from Kiddle encyclopedia articles (including the article images and facts) can be freely used under Attribution-ShareAlike license, unless stated otherwise. Cite this article:
Beehive (New Zealand) Facts for Kids. Kiddle Encyclopedia.