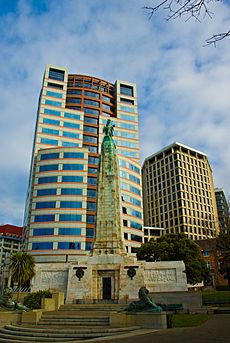 Bowen House, with the Wellington Cenotaph in front on it

Bowen House is a 22-storey office building on the corner of Lambton Quay and Bowen Street, Wellington, New Zealand, that is leased by the New Zealand Parliament and houses some members of Parliament and government staff.

The building was designed by Warren and Mahoney architects. Construction began in 1988 and was completed in 1990. It has been leased by the New Zealand Parliament since 1991. It was once owned by Government Property Services, which was privatised as Capital Properties New Zealand by a National–New Zealand First coalition government in 1998. In 2012 AMP Capital sold the building to Farhad Vladi, a German property investor.

Bowen House contains offices for the smaller parties, select committee staff, and some of the ministers and their support staff. It is connected to the Executive Wing (the Beehive) of the Parliament Buildings by an underground travelator under Bowen Street. Bowen House is part of the parliamentary security system, and the government is the only tenant in the building.

All content from Kiddle encyclopedia articles (including the article images and facts) can be freely used under Attribution-ShareAlike license, unless stated otherwise. Cite this article:
Bowen House Facts for Kids. Kiddle Encyclopedia.