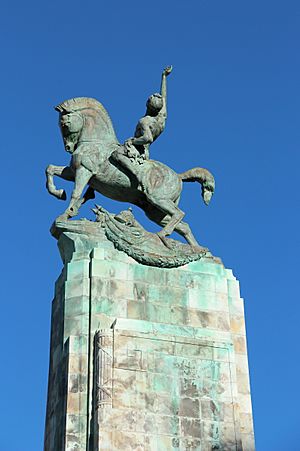 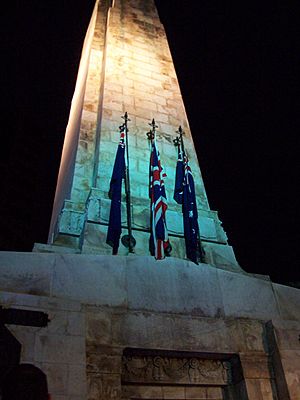 The cenotaph just before dawn on Anzac Day 2007. 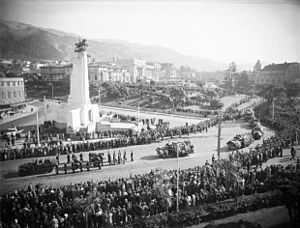 Michael Joseph Savage's funeral procession next to the cenotaph in 1940. 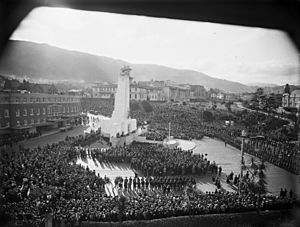 Crowd surrounding the Cenotaph, Wellington, at the dedication ceremony in 1932.

The Wellington Cenotaph, also known as the Wellington Citizens' War Memorial, is a war memorial in Wellington, New Zealand. Commemorating the New Zealand dead of World War I, and World War II. it was unveiled on Anzac Day (25 April) 1931 and is located on the intersection of Lambton Quay and Bowen Street, by the New Zealand Parliament Buildings. It features two wings decorated with relief sculptures and is topped with a bronze figure on horseback. Two bronze lions and a series of bronze friezes were later added in commemoration of World War II. On 18 March 1982, it was registered as a Category I historic place with registration number 215. It is a focus of Anzac Day commemorations in the city.

On 2 September, 2013 new plans for the cenotaph were presented including a new staircase and water feature up to the Parliament Buildings. The works also includes repairs to the cenotaph surface materials and creation of a square to create a ceremonial space.

In 2015 the Wellington Anzac Day citizen's wreath-laying ceremony was held at the upgraded National War Memorial.

All content from Kiddle encyclopedia articles (including the article images and facts) can be freely used under Attribution-ShareAlike license, unless stated otherwise. Cite this article:
Wellington Cenotaph Facts for Kids. Kiddle Encyclopedia.