Anzac Day is a national day of remembrance in Australia and New Zealand that broadly commemorates all Australians and New Zealanders "who served and died in all wars, conflicts, and peacekeeping operations" and "the contribution and suffering of all those who have served". Observed on 25 April each year, Anzac Day was originally devised to honour the members of the Australian and New Zealand Army Corps (ANZAC) who fought at Gallipoli against the Ottoman Empire during World War I. Anzac Day is also observed in the Cook Islands, Niue, Pitcairn Islands, and Tonga.

The acronym ANZAC stands for Australian and New Zealand Army Corps, whose soldiers were known as Anzacs. Anzac Day remains one of the most important national occasions of both Australia and New Zealand. 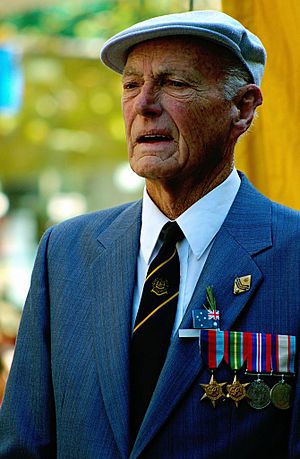 An Australian veteran on Anzac Day

The ANZAC tradition began during World War I with a landing in 1915 at Gallipoli on the Turkish Aegean coast. Because of a navigational error, the Anzacs came ashore about a mile north of the intended landing point. Instead of facing the expected beach and gentle slope they found themselves at the bottom of steep cliffs, offering the few Turkish defenders an ideal defensive position.

What had been planned as a bold strike to knock the Ottomans out of the war quickly became a stalemate, and the campaign dragged on for eight months. At the end of 1915, the Allied forces were evacuated after both sides had suffered heavy casualties and endured great hardships.

Though they had failed in their attempts of capturing Constantinople and knocking the Ottoman Empire out of the war, the actions of the Australian and New Zealand troops during the war left a powerful legacy. The beginnings of what became known as the "Anzac legend" became an important part of the national identity in both countries. This has shaped the way their citizens have viewed both their past and their understanding of the present.

Beginnings of the Memorial Day 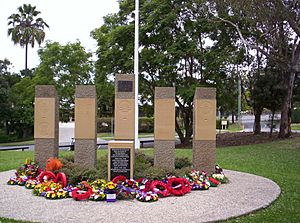 On April 30 1915, when the first news of the landing reached New Zealand a half-day holiday was declared and services were held to recognise the efforts of those who had landed in Gallipoli.

The date 25 April was officially named Anzac Day in 1916; in that year it was marked by a wide variety of ceremonies and services in Australia and New Zealand, including a commemorative march through London involving Australian and New Zealand troops. 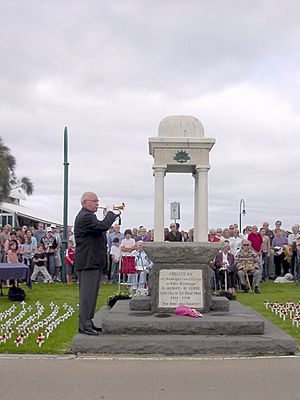 The Last Post is played at an ANZAC Day ceremony in Port Melbourne, Victoria, 25 April, 2005. Ceremonies like this are held in virtually every suburb and town in Australia and New Zealand on ANZAC Day each year

After the First World War, returned soldiers sought the companionship they felt in those quiet, peaceful moments before dawn. With links to the dawn landing at Gallipoli, a dawn ceremony became a common form of Anzac Day remembrance during the 1920s. Before dawn the gathered veterans would be ordered to "stand-to" and two minutes of silence would follow. At the start of this time a lone bugler would play the Last Post and then concluded the service with Reveille.

In Australia and New Zealand the ANZAC Day commemoration still features a "dawn service". The first official dawn service was held at the Sydney Cenotaph in 1927 and is now held at war memorials around the country.

Typical modern dawn services follow a pattern that is now familiar to generations of Australians, containing the following features: introduction, hymn, prayer, an address, laying of wreaths, reading of verses, the playing of the Last Post, a minute of silence, Reveille, and the playing of both the New Zealand and Australian national anthems. One of the traditions of Anzac Day is the 'gunfire breakfast' (coffee with rum added), which occurs shortly after many dawn ceremonies. In Australia, sprigs of rosemary are often worn on lapels and in New Zealand poppies have taken on this role. 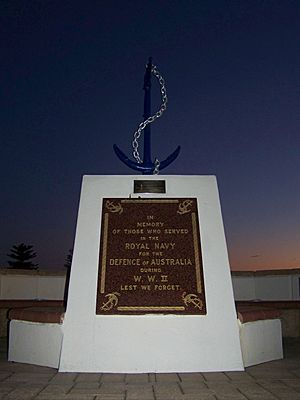 This is the verse of the ode that is said during the minutes of silence on Anzac Day:

They shall grow not old,
As we that are left grow old,
Age shall not weary them,
Nor the years condemn.
At the going down of the sun,
And in the morning
We will remember them.

The verse is traditionally concluded with the words "Lest We Forget." 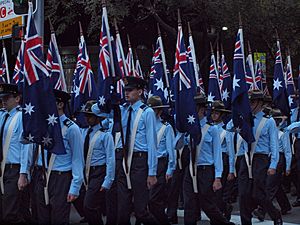 Marches by veterans from all past wars are held in capital cities and towns nationwide. The ANZAC Day parade from each state capital is televised live with commentary. These events are followed generally by social gatherings of veterans, hosted either in a pub or in an RSL Club, often including a traditional Australian gambling game called "two-up", which was an extremely popular pastime with ANZAC soldiers.

Although Australia's official national day is in fact "Australia Day", many Australians have now come to regard ANZAC Day as the true national day of the country. Despite federation being proclaimed in Australia in 1901, the national identity of Australia was largely forged during World War 1, and the most iconic event in the war for most Australians was the landing at Gallipoli. 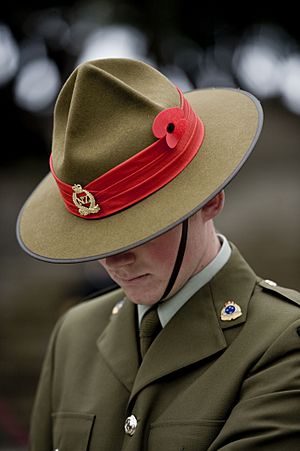 New Zealand's celebration of ANZAC Day is similar, ANZAC Day now promotes a sense of unity, perhaps more effectively than any other day on the national calendar. People whose beliefs are widely different can share a genuine sorrow at the loss of so many lives in war, and a real respect for those who have endured warfare on behalf of the country we live in. 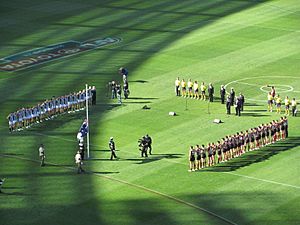 During many wars, Australian rules football matches have been played overseas in places like northern Africa, Vietnam, and Iraq as a celebration of Australian culture and as a bonding exercise between soldiers.

The modern-day tradition began in 1995 and is played every year between traditional AFL rivals Collingwood and Essendon at the Melbourne Cricket Ground. This annual match is often considered the biggest of the AFL season outside of the finals. A record crowd of 94,825 people attended the inaugural match in 1995. The Anzac Medal is awarded to the player in the match who best exemplifies the Anzac spirit – skill, courage, self-sacrifice, teamwork and fair play.

All content from Kiddle encyclopedia articles (including the article images and facts) can be freely used under Attribution-ShareAlike license, unless stated otherwise. Cite this article:
ANZAC Day Facts for Kids. Kiddle Encyclopedia.