Te Awamutu is a town in the Waikato region in the North Island of New Zealand. It is the council seat of the Waipa District and serves as a service town for the farming communities which surround it. Te Awamutu is located some 30 kilometres (19 mi) south of Hamilton on State Highway 3, one of the two main routes south from Auckland and Hamilton.

Te Awamutu has a population of 13,100 (June 2020), making it the fifth-largest urban area in the Waikato behind Hamilton, Taupō, Cambridge and Tokoroa.

The town is often referred to as "The Rose Town of New Zealand" because of its elaborate rose gardens in the centre of the town. Many local businesses use "Rosetown" in their name, and the symbol of the rose is widely used on local signs and billboards. The local paper, Te Awamutu Courier, has a symbol of a rose in the masthead on its front page. 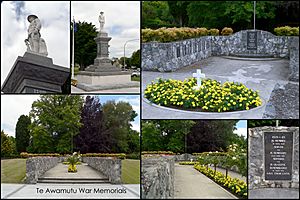 Tainui Maori first settled in the area in about 1450, according to noted Tainui historian Te Hurinui-Jones. Te Awamutu means "the river cut short", as it marked the end of the navigable section of the Mangapiko Stream.

The first European missionaries visited the area in 1834. The CMS missionaries established a flourishing trade school that focused on developing agricultural skills. The missionaries introduced European crops such as wheat, potatoes and peaches; they provided advice and some capital to help local Maori establish eight local flour mills in the wider area. They assisted in finding a suitable miller to operate the mills and to train Maori in this skill. During the 1850s the wider area prospered on the back of sending surplus farm produce to Auckland. For a brief period wheat was even sent overseas. By the late 1850s prices dropped as cheaper flour and other foodstuffs were imported from Australia. This caused huge resentment among local Maori who had grown use to the wealth provided by trade. Some of the more warlike Maori such as Rewi Maniapoto blamed the missionaries for having a negative influence on Maori tikanga (cultural practices). He attempted to kill the local missionary and burnt down the trade school and other mission buildings. Other Christian Maori warned other Europeans to leave the Waikato as their lives were in danger. Te Awamutu was a major site during the New Zealand land wars of the 19th century, serving as a garrison town for the colonial settlers from 1864. European settlement began at the conclusion of the Waikato Wars (1863–1865).

The town has a large dairy factory, and serves as an important centre in the local dairy industry.

The town is often referred to as "The Rose Town of New Zealand" because of its elaborate rose gardens in the centre of the town. Many local businesses use "Rosetown" in their name, and the symbol of the rose is widely used on local signs and billboards. The local paper, Te Awamutu Courier, has a symbol of a rose in the masthead on its front page.

Te Awamutu literally means in English "The River's End". The town is on gently undulating land close to the banks of a tributary of the Waipa River. The Waikato Plains lie to the north and east, and the promontory of Mount Pirongia, 20 kilometres to the west, is easily visible. Inside the township are two streams called the Mangapiko Stream and the Mangaohoi Stream. The Mangaohoi ends and becomes the Tributary of the Mangapiko near Memorial park.

The town is close to the extinct Kakepuku and Pirongia volcanoes (and other volcanoes of the Alexandra Volcanic Group). Maungatautari, another extinct volcanic cone, now the site of New Zealand's largest ecological restoration project, is also nearby.

The proportion of people born overseas was 14.7%, compared with 27.1% nationally.

Te Awamutu Museum was established in 1935. The museum has a number of permanent exhibitions focusing on the history of Te Awamutu and the surrounding area. There is also an exhibition, 'Everyone is here' focusing on Tim and Neil Finn, brothers and Te Awamutu natives, of the bands Split Enz and later Crowded House; the town was mentioned in the latter's 1986 song "Mean To Me", and also in Split Enz's earlier song "Haul Away".

The museum contains one of the most famous early Māori artefacts, a large carved post known simply as Te Uenuku. This impressive carving has caused much controversy because its style is markedly different from any other early Māori work, yet it is clearly of a Māori design.

The Te Awamutu Museum is one of the attractions of the town, and has many exhibitions relating to the history of the area. Te Awamutu itself is located on SH3, one of the major routes used when touring the North Island of New Zealand.

There are also three other schools in the town:

The town's best known residents are the Finn Brothers, Tim and Neil, whose musical careers have stretched from Split Enz through the internationally successful Crowded House to their current solo and collaborative works. The town is mentioned in Split Enz's song "Haul Away", and also in Crowded House's 1986 song "Mean to Me", the debut single from their self-titled debut album. Musician Spencer P. Jones (The Beasts of Bourbon, Paul Kelly and The Coloured Girls) was also born in Te Awamutu.

All content from Kiddle encyclopedia articles (including the article images and facts) can be freely used under Attribution-ShareAlike license, unless stated otherwise. Cite this article:
Te Awamutu Facts for Kids. Kiddle Encyclopedia.