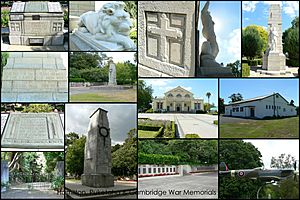 Prior to the arrival of Europeans there were a number of pā in the vicinity of what would become Cambridge. In the 1850s missionaries and farmers from Britain settled in the area and introduced modern farming practices to local Māori, helping them set up two flour mills and importing grinding wheels from England and France.

The European town of Cambridge was established when the 3rd Regiment of the Waikato Militia were settled there in 1864 following the Invasion of the Waikato. The town was named after Prince George, Duke of Cambridge, the Commander-in-Chief of the British Army at the time.

Cambridge lies adjacent to State Highway 1, which connects the town with Hamilton in the northwest and Tauranga, Rotorua and Taupo in the southeast. Access to Cambridge from the north is via the Cambridge Road and Victoria Road interchanges, and from the south is via the Tirau Road interchange. Prior to the Waikato Expressway extension opening in December 2015, SH 1 ran through the centre of Cambridge.

State Highway 1B leaves SH 1 at the Victoria Road interchange and provides a route north to SH 1 at Taupiri, providing a route north towards Auckland while bypassing Hamilton to the east.

The nearest airport is Hamilton Airport (New Zealand) which is 18 minutes drive from Cambridge and provides daily flights to all New Zealand's main centres.

Cambridge was formerly the terminus of the Cambridge Branch railway, but this closed beyond Hautapu in 1999.

Cambridge and the surrounding district is host to many sporting, cultural and trade events. World events have included the 2010 World Rowing Championships at Lake Karapiro and the 2015–16 UCI Track Cycling World Cup held in December 2015. More than 120,000 visitors attend the National Agricultural Fieldays every June at the Mystery Creek Events Centre between Cambridge and Hamilton.

Every summer, Lake Karapiro hosts the Waka Ama Sprint National Championships and the hydroplane racing as part of the New Zealand Grand Prix Circuit. In February, the Keyte Watson Polo Tournament takes place at Leamington, Cambridge. Every March, Cambridge holds its four-day Autumn Festival and in December, a Christmas Festival (including a town parade) takes place.

All content from Kiddle encyclopedia articles (including the article images and facts) can be freely used under Attribution-ShareAlike license, unless stated otherwise. Cite this article:
Cambridge, New Zealand Facts for Kids. Kiddle Encyclopedia.