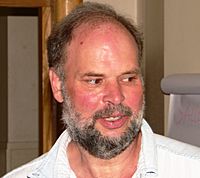 Sir Vaughan Frederick Randal Jones KNZM FRS FRSNZ FAA (31 December 1952 – 6 September 2020) was a New Zealand mathematician. He was known for his work on von Neumann algebras and knot polynomials. He was awarded a Fields Medal in 1990. He was born in Gisborne, New Zealand.

Jones died on 6 September 2020 from problems caused by an ear infection at the age of 67.

All content from Kiddle encyclopedia articles (including the article images and facts) can be freely used under Attribution-ShareAlike license, unless stated otherwise. Cite this article:
Vaughan Jones Facts for Kids. Kiddle Encyclopedia.