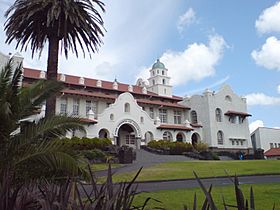 Auckland Grammar School is a public school in Auckland New Zealand. It teaches boys from age thirteen to eighteen. The school also has some places near the school where students who come from distant places can live. It is one of the biggest schools in New Zealand. The school has more than two thousand students. The School's motto is "Per Angusta Ad Augusta". It means "Through difficulties to greatness".

Auckland Grammar School was first set up in 1868 by Sir George Grey. He was the governor of New Zealand from 1861-1868. During that time, the new European settlers were fighting with the Māori people over land rights issues. The Governor of New Zealand asked for military help from the British Empire. Britain sent up to one million soldiers to New Zealand to end the problems. Many of the soldiers settled with their families in Auckland. Sir George Grey decided to create Auckland Grammar School to give a very good education to the soldiers' sons.

Tibbs House was opened in 1962 with 46 boys to provide an opportunity for boys outside of the greater Auckland area to attend Auckland Grammar School.

It was named after the fourth Headmaster of Auckland Grammar School, Mr J W Tibbs MA, CMG, who was Headmaster from 1893 to 1922. A statue of Mr Tibbs can be found at the entrance to Old Tibbs House.

People of all classes or racial background who live in New Zealand are all the same when it comes to being allowed to go to the school. The school believes it is very important to teach many different languages and, in particular, 'the instructing in Latin.' The school tries to get all of the students to do very well in all educational areas, for example, Academic, Sporting and Cultural fields. The school does however show some disregard for national educational standards. Auckland Grammar is considered one of the more "uptight" schools in the Auckland region offering conforming students the best education.

All content from Kiddle encyclopedia articles (including the article images and facts) can be freely used under Attribution-ShareAlike license, unless stated otherwise. Cite this article:
Auckland Grammar School Facts for Kids. Kiddle Encyclopedia.