Ohakune is a small town in the North Island of New Zealand, situated 215 kilometres north of Wellington and 292 kilometres south of Auckland. It is located at the southern end of the Tongariro National Park, close to the southwestern slopes of the active volcano Mount Ruapehu. Located within the Manawatu-Wanganui region, the town is 70 kilometres northeast of Wanganui and 25 kilometres west of Waiouru.

A rural service town known as New Zealand's Carrot Capital, Ohakune is a popular base in winter for skiers using the ski fields (particularly Turoa) of nearby Mount Ruapehu and in summer for trampers hiking the Tongariro Alpine Crossing.

Historically, the lands to the south and west of Mount Ruapehu were inhabited by the Māori of the Ngāti Rangi iwi. Around the middle of the seventeenth century a marae (village) at Rangataua, a small town about 3 miles south-east of Ohakune, was attacked and the inhabitants were driven from their homes by raiders from the Ngāti Raukawa, an iwi from farther east in Manawatu. Around 75 of the village's population were slain and the dozen or so survivors fled to Mangaorongo and established a pā on the present site of the town of Ohakune.

In 1883 the first engineering reconnaissance commenced for the Marton – Te Awamutu section of the North Island Main Trunk Railway and a base was established upon the present site of Ohakune, and soon became a permanent camp for railway and road construction workers. Settlement of the town is considered to have commenced in the early 1890s and by March 1908 the railway line had reached Ohakune. The period of railway construction activities was followed quickly by intensive timber milling; as the forest was cleared, cattle and sheep were introduced and farming progressed. Ohakune was constituted a town district in August 1908 and in November 1911 attained borough status.

The meaning of the name Ohakune is obscure.

In 2015, the town received national publicity after schools were placed in lockdown due to the police being shot at and rammed.

On the eastern edge of the town there is a large replica of a carrot, known locally as "The Big Carrot". This is reputedly the world's largest model carrot, and was originally constructed as a prop for a television advertisement for the ANZ Bank in the early 1980s. After filming the carrot was donated to Ohakune, in recognition of the area's reputation as the source of a high proportion of New Zealand's carrots, and installed in its current position in 1984. 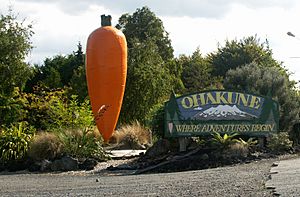 In the 1980s and 90s Ohakune used to be home to the Weather Rock, a local landmark in Thames Street popular with tourists for photographs; the rock used to "forecast" current weather conditions with a sign listing sayings such as "If rock is hot - sunny", "If rock is wet - raining", etc., and appropriately for the region, "If rock is bouncing - earthquake". The site is currently vacant.

In 2015 Ohakune had a dental clinic, pharmacy, fire station, police station, ambulance station, social welfare branch, churches, a marae with a district nurse, gymnasium, and a health shuttle for outpatient care at Wanganui Hospital 110 km away.

The nearest medical centre with GP, nurses and physiotherapist is 11 km to the west, at Raetihi.

Ohakune has the usual range of shops and services found within a typical small New Zealand town.

Ohakune provides easy access to the nearby ski fields of Mount Ruapehu; the large commercials ski resorts of Turoa (the closest resort to Ohakune) and Whakapapa, and well as the small club field Tukino. Various outlets for clothing and ski hire, as well as purchasing lift tickets, are available in the town.

Ohakune is the home of the Ski FM Network hosted by 91.8 FM Ruapehu/Turoa, a Central North Island radio station that has been in operation for more than 25 years providing local information regarding mountain conditions in both winter and summer. During the winter it is the "information desk" and source of all things snow for the region. During the summer its website (along with the 0800 number) become a hub for summer tourists, and locals alike, for up-to-the-minute information.

Various water activities are available on the nearby rivers, with jet boating on the Whanganui River and rafting available along the Whanganui, Rangitikei and Tongariro rivers. Trout fishing is available in nearby lakes and rivers, including the world famous Tongariro River. Activities can be booked at the Ruapehu i-SITE.

The Bridge to Nowhere in the Whanganui National Park located between Okakune and Wanganui is a popular destination for trampers and mountain bikers.

In recent years the number of events hosted by Ohakune has increased, with both the Big Mountain Short Film Festival and Ohakune Mardi Gras featuring on the calendar. The Mardi Gras is both a ski party and celebration of winter, and includes musicians, stalls and rides.

Ohakune is also part of the Fallout Festival, an annual event that focuses on bringing creative elements into the community to celebrate the snow season.

State Highway 49 runs through the town, where it is locally named Clyde Street. Ohakune is also on the North Island Main Trunk Railway.

Ohakune is on the Intercity coach network, with a daily service running north to Auckland via Taumarunui and south to Palmerston North via Wanganui.

Local services to Taupo via the towns of National Park and Turangi are operated by a private shuttle service, the Alpine Hot Bus.

The North Island Main Trunk Railway provides passenger and freight rail services to Ohakune. The railway station is located off Thames Street in the Ohakune Junction area, approximately 2.5 kilometres from Clyde Street in the centre of town.

Passenger services are provided by the national operator KiwiRail. The Northern Explorer is a non-daily service operating between Auckland and Wellington. The journey to/from Auckland crosses the famous Raurimu Spiral.

From 18 December 1917 until 1 January 1968, Ohakune was also the junction for the Raetihi Branch, a branch line railway to Raetihi. A truss bridge formerly used by this branch still stands near the Big Carrot. Seventeen kilometres to the east of the town is the Tangiwai Bridge, site of New Zealand's worst railway accident, the Tangiwai Disaster, on 24 December 1953.

The world's first commercial bungy jumping site was established just outside Ohakune at the old railway viaduct. This was operated during the 1980s until the bridge became too unsafe to continue operations. This bridge is now restored and a highlight of the 'Old Coach Road' walk/bikeway.

Ohakune railway station has the second highest elevation of any operating railway station in New Zealand behind National Park Railway Station; a sign on the platform side of the station building lists its height at 2,029 feet (618.4 metres) above sea level.

All content from Kiddle encyclopedia articles (including the article images and facts) can be freely used under Attribution-ShareAlike license, unless stated otherwise. Cite this article:
Ohakune Facts for Kids. Kiddle Encyclopedia.