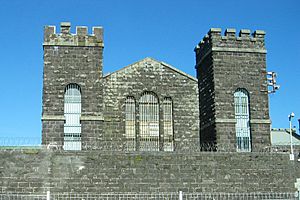 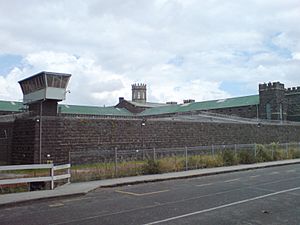 Exterior view of the old prison.

The original Mount Eden prison was a military stockade built in 1856. It became Auckland's main prison when the old city jail on the corner of Queen and Victoria Streets was demolished in 1865. The stone wall and the foundations were completed in 1872, the building proper was commenced in 1882 and finished in 1917.

Intended to house 220 prisoners, it was designed by Pierre Finch Martineau Burrows and resembles Dartmoor Prison in England. Its design consisted of wings radiating from the centre like the spokes of a wheel. This allowed for control from the centre and "a new mode of obtaining power of mind over mind", an application of the panopticon prison design theories of Jeremy Bentham.

In July 2000, the prison was kept in control of the Department of Corrections and a new building transferred to the control of Australasian Correctional Management Limited (later Global Expertise in Outsourcing NZ Ltd) and became New Zealand's first privately run prison. It was renamed the Auckland Central Remand Prison. However, the Labour Party was opposed to the privatisation of prisons, and in July 2005 put the prison back under the control of the Department of Corrections. 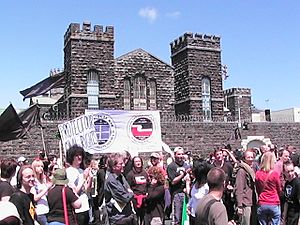 The Prisons have been the site of several protests. Pictured is a protest which took place in October 2007 over recent police raids.

In June 2007 it was announced that a new six-storey prison building and a four-storey accommodation block would be built on the southern side of the building by 2011, adding 450 beds. The Auckland Central Remand Facility was then amalgamated into a new Mt Eden Correctional Facility. The plan was for the old prison to be converted to administrative space, in accordance with its heritage classification. To date it has not happened and lays dormant.

The redevelopment included a secure gatehouse, a visitor centre and a multilevel carpark added to the structure. Tunnels link the different sections. The barbed wire around the complex disappeared and was replaced by high and secure walls. There was some criticism of the proposed height of the new prison building, which at up to 30 metres (98 ft) is visible from the nearby motorway viaduct and towers over the surrounding area, which has a 15-metre (49 ft) building height limit. Vocal opponents included the former Mayor of Auckland, John Banks.

In May 2010, the National-led government decided that contract management would again be implemented at Auckland Central Remand Prison. The contract was awarded to Serco, a British company that runs prisons in several different countries.

On 16 July 2015, footage of "fight clubs" within the prison emerged online and was reported by TVNZ. Serco was heavily criticized for not investigating until after the footage was screened. On 24 July, Serco's contract to run the Mount Eden prison was revoked and operation was given back to the New Zealand Department of Corrections. Serco was ordered to pay $8 million to the New Zealand government as a result of problems at Mount Eden Prison while it was under Serco's management.

All content from Kiddle encyclopedia articles (including the article images and facts) can be freely used under Attribution-ShareAlike license, unless stated otherwise. Cite this article:
Mount Eden Prisons Facts for Kids. Kiddle Encyclopedia.