Mount Eden is a suburb in Auckland, New Zealand whose name honours George Eden, 1st Earl of Auckland. It is 4 kilometres (2.5 mi) south of the Central Business District (CBD). Mt Eden Road winds its way around the side of Mount Eden Domain and continues to weave back and forth as it descends into the valley; it runs south from Eden Terrace to Three Kings. Mt Eden village centre is located roughly between Valley Road and Grange Road. The domain is accessible on foot from many of the surrounding streets, and by vehicle from Mt Eden Road. The central focus of the suburb is Maungawhau / Mount Eden, a dormant volcano whose summit is the highest natural point on the Auckland isthmus.

In pre-European times Mount Eden was utilised as a fortified hill pa by various Māori tribes. The pa is thought to have been abandoned around 1700 AD after conflict between the resident Waiohua people and the Hauraki tribes The earth ramparts and terraces from this period contribute to the distinctive outline of the hill today. 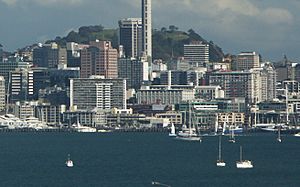 Mount Eden as seen through the city buildings, from Northcote.

The area directly around the hill consists of very fertile free-draining soil mixed with a great deal of volcanic debris in the form of scoria rocks. When Europeans came to the area, they found a landscape devoid of large trees, as anything of any size had been cut down by the Maori for various uses, such as the timber palisades of the pa. The land was covered with bracken, flax and Manuka trees, with whau shrubs growing on the hill. The Europeans cleared the land of the scoria rocks and made fences with them to define property boundaries. This resulted in a landscape reminiscent of Ireland or the Scottish lowlands. These scoria walls are still a feature of the suburb today.

Initially the land was utilised for farms, but from quite early on the area hosted country residences of professionals and business people from Auckland. Most of the farm land was subdivided into large suburban plots between 1870 and 1875, and the principal roads were formed by the Crown. Mt Eden's first school opened in 1877 on the corner of Mt Eden and Valley roads. In 1879 the mountain was officially protected as a public reserve. The tea kiosk on the slope of Mt Eden was built in 1927.

Mt Eden is now a "leafy suburb" predominantly of large houses from the first half of the 20th century. The gardens are verdant and the trees have grown large. On the eastern slopes of Mt Eden were constructed several large country houses set in extensive grounds. These included "Harewood House" (now the site of the Mater Hospital), Justice Gillies "Rocklands Hall" (now a hostel), Alfred Buckland's "Highwic" (now a museum), the Hellaby family's "Florence Court", Josiah Clifton Firth's "Clifton House" (both still private residences) and Professor Sir Algernon Thomas' "Trewithiel" (the garden is partially preserved in Withiel Thomas Reserve and the reduced house at 114 Mountain Road). Close by the current Government House (official Auckland residence of the Governor General) is Eden Gardens, a ornamental public garden set up in a disused quarry. 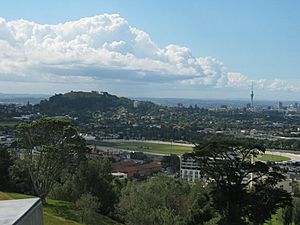 Mount Eden (to the left of the picture, beyond Alexandra Park) from One Tree Hill

In the 1950s and 1960s the inner suburbs became unfashionable and the old houses of the Mt Eden area were comparatively cheap to buy. Mt Eden developed a slightly bohemian image during this time as a community of artists, writers, teachers and university lecturers made it their home. Mt Eden village is still regarded by many as the "Home Of Arts" in Auckland, due to the large amount of creative activity in and around the suburb and the large number of artists who live nearby.

The Presbyterian Boys' Hostel at 22 View Road is a historic building that became the first home for many young men, who moved to Auckland to train in government and industry at low rates of pay.

In Mt Eden, the plentiful supply of volcanic stone (a suitable material for building roads), as well as the ready supply of labourers from the Mt Eden Prison, allowed for a progressive development of early roads, many of which still exist today as main arterial routes. Toll gates were established on several main roads, including Mt Eden Road and Dominion Road, during the 19th century in order to help pay for their upkeep.

Public transportation extended from the inner city to the surrounding areas in the late 1870s and early 1880s with horse-drawn buses being the first mode of regular public transportation in the late 1870s. In 1881, the long awaited railway came, connecting Newmarket with Helensville with stops in Mt Eden, Kingsland, Morningside and Mt Albert. At the beginning of the 20th century, trams began connecting Mt. Eden, Balmoral, Kingsland, and Mt Albert with the city. The trams ran for the last time in the 1950s.

Mt Eden falls within the Epsom constituencies for the national Parliament. In terms of local government, Mt Eden comes under the Albert-Eden Local Board, of Auckland Council. The Albert-Eden Local Board includes the suburbs of Waterview, Point Chevalier, Sandringham, Mount Albert, Morningside, Owairaka, Balmoral, Kingsland, Mt Eden, Epsom and Greenlane.

During the 19th century, the planning and maintenance of the main arterial roads (Mt Eden Road and Dominion Road) provided the impetus to form local governing bodies in the area. The Mt Eden Highway Board held its first meeting in 1868; it covered the area of Mt Eden, Eden Valley, Sandringham, and Balmoral. At the time it was responsible for building and maintaining the roads, as well as dealing with the pigs, horses, cattle, and sheep that freely roamed the area. In 1882 it became the Mt Eden Road Board. In 1906 Mt Eden gained borough status and the Mt Eden Borough Council was formed. In 1989 the Borough Council amalgamated with Auckland City Council in a nationwide local government reorganisation. And in November 2010, the City Council was dissolved and was incorporated into the new largerAuckland Council.

Eden Park has been home to Auckland Cricket since 1910, and also hosts international test and one-day cricket matches. The ground has also been the home of the Auckland Rugby Union since 1925, hosting major international rugby games.

There are several prestigious secondary schools located in and around Mt Eden including St Peter's College, Epsom Girls Grammar School and Auckland Grammar School, as well as the Epsom Campus of the University of Auckland (previously the Auckland College of Education).

There are three War Memorials in the Mount Eden area;

Mt Eden is well served by trains and buses, and is only 5 kilometres (3.1 mi) from Auckland’s CBD. The train station is located at the north side of Mt Eden, between Ngahura Street and Fenton Street. Mount Eden Railway Station is a part of the Western Line; trains run regularly into the city and the western suburbs beyond.

The centre of all the shopping and business activities in Mt Eden village is Mt Eden Road, between Oaklands Road and Grange Road. By vehicle Mt Eden can be accessed from the Southern Motorway (SH1) by taking the Green Lane off-ramp, and continuing onto Balmoral Road or from the City end – via Symonds Street and Mt Eden Road. Mount Eden domain is located just north of the village centre along Mt Eden Road.

All content from Kiddle encyclopedia articles (including the article images and facts) can be freely used under Attribution-ShareAlike license, unless stated otherwise. Cite this article:
Mount Eden Facts for Kids. Kiddle Encyclopedia.