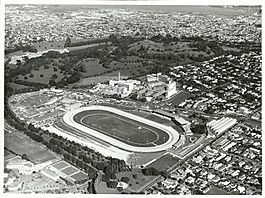 Alexandra and Cornwall Parks, National Women's and Greenlane hospitals from the air in 1973

Named after Queen Alexandra this is believed to be the site of Auckland's first organised racing in 1842. Part of William Potter's large farm it was known as Potter's Paddock. Bought for their draught horses by the tramways company in 1887 it was, by agreement, still used for football, Rugby and cricket matches. Regular Auckland Trotting Club meetings began in 1890. Ten years later on the visit of her eldest son, the duke of Cornwall, it received the name Alexandra Park and the parkland around it was named Cornwall Park. The first grandstand went up about this time.

Auckland Trotting Club bought the property in 1912 and the facilities have been continuously modernised and provision made for other events and activities. Regular Friday Night Trots (harness racing) under lights have been an Auckland institution since 1958.

In recent years the club's business model has been expanded and successfully overhauled. Under the leadership of former chief executive Dominique Dowding (who resigned in February 2019) and the board of the Auckland Trotting Club, considerable work has been done to ensure Alexandra Park's continued success as well as a long-term financially viable future for harness racing in the northern region. However, the financial success of the club took a severe blow with the problems incurred in the new village development (see Residential development below).

Emphasis has been put on delivering the board's three strategic pillars:
1. To revitalise and reposition harness racing in the region;
2. Grow the business and attract new audiences; and
3. Lift the value of the club's existing property portfolio.

The club's strategic refocusing was recognised at the 2015 Westpac Auckland Business Awards where Alexandra Park took out the supreme title for ‘Excellence in Strategy & Planning’. In 2016 the club was a Central area finalist for ‘Excellence in Marketing’ and ‘Excellence in Customer Service Delivery’.

Recent operational milestones for the club have included merging with the Franklin Trotting Club to provide training facilities in Pukekohe to help reduce the costs for trainers. The board has also announced a number of incentives to lift racing participation at Alexandra Park.

2015 saw the construction and long-term leasing out of a training centre for Super 15 rugby franchise, The Auckland Blues.

Other tenants include Cirque du Soleil; Grand Park Chinese restaurant, Sport Auckland, Lollypops day-care, and Caltex and Burger King on Manukau Road. On course, The Alex Eatery is owned and operated by the club while the park's TAB has the biggest turnover of any in the country, boasting an annual take of over $11m.

On Alexandra Park's conference centre, considerable investment has been made to upgrade the functions facilities with ongoing improvements to in-house catering. Subsequently, utilisation has risen from corporates, large public entities, service clubs and schools. At the same time Alexandra Park is promoting more race-night and hospitality events, with a focus to attract a higher spend audience.

All content from Kiddle encyclopedia articles (including the article images and facts) can be freely used under Attribution-ShareAlike license, unless stated otherwise. Cite this article:
Alexandra Park, Auckland Facts for Kids. Kiddle Encyclopedia.