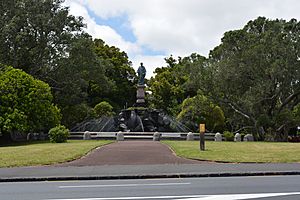 Sir John Logan Campbell's statue at Cornwall Park's formal entrance in Epsom at 308—312 Manukau Road. Access is on either side of the statue by Campbell Crescent to Puriri Drive

Cornwall Park is an expansive parkland in Epsom near the heart of Auckland, New Zealand, surrounding the park containing Maungakiekie pa or the hill of One Tree Hill. The two independent parks form one large park of 670 acres (270 hectares).

The Park has centuries-old heritage sites, wide-open spaces, tree lined avenues and walks, places of peace and tranquility in a large city, sports grounds including tennis and bowls and a working farm for the education of city children.

John Logan Campbell, Auckland resident since 1840 and, at the time of this gift, mayor, gave the park's 230 acres to a private trust on 10 June 1901. The adjoining Park Maungakiekie had been purchased by the national government in 1845 and since 2012 belongs to Ngā Mana Whenua o Tāmaki Makaurau Collective.

Campbell chose to present the deeds the following day to the visiting heir to the throne, the Duke of Cornwall and York later George V asking his consent for it to be named Cornwall Park in honour of the Duke. A few weeks later the adjoining Alexandra Park was named in honour of the Duke's mother. 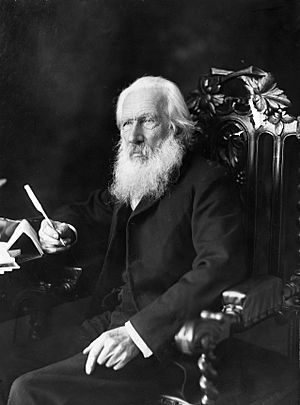 Campbell gave the land to Cornwall Park Trust, a trust he had established for the purpose. The park was described at the time as "two hundred and thirty acres of the finest land in the district", or 93 hectares, a portion of some 1,100 acres (450 hectares) at One Tree Hill bought by Dr Campbell many years before. He had planned to build a house there and planted the parkland in preparation for that but he subsequently chose to live near the centre of the city in Parnell, his home was named 'Kilbryde' and situated on part of the site of their rose gardens. Still marked by his trees the carriage drive he made in Cornwall Park sweeps in an S-bend from Puriri Drive across Greenlane west of the Park's Greenlane entrance to his house site near Huia Lodge. Visitors may walk along it from the gate opposite the Park's administration and works depot in Greenlane. There were to be further gifts including the land about Puriri Drive and Campbell Crescent and the endowment lands, housing sites to be made available on 21-year leases.

A large part of Cornwall Park showing the obelisk and One Tree Hill Domain spreading beyond the showgrounds and the tall white buildings of Greenlane Clinical Centre. The camera is on Mt Eden

The deeds handed to the trustees stated "the said lands are and shall be held by the Trustees on trust for the people of the colony of New Zealand, and also for such public purposes for the general benefit of the people of New Zealand in the way of affording them recreation, enjoyment, pleasure and instruction and other similar benefits and advantages of that nature as the Trustees shall from time to time consider best." 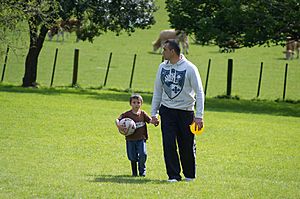 A scheme was laid out by young landscape designer Austin Strong (1881–1952) inspired by Golden Gate Park in San Francisco.

In 1907 a second gift of 104 acres (42 hectares) and the following year another 143 acres (58 hectares) for endowment to be let on building leases to create income to help with the park's upkeep. Together these new gifts made a total area of 477 acres (193 hectares) within Cornwall Park. Combined with the adjoining almost encircled city-owned One Tree Hill Domain of 130 acres (53 hectares) there was now one Park of 607 acres (246 hectares).

However the trustees were personally liable for any expenditure that could not be met by the trust's funds and so in 1914 residential sites along Wheturangi Road were sold on long term lease to meet immediate needs for cash and the trustees asked that local bodies give consideration to some form of rate relief complaining that over 60 per cent of the trusts revenue went in taxes. St Cuthbert's College took 8 acres by the formal entrance on a 99-year building lease in 1919. After many years of petitions and representations from Auckland to Parliament in 1922 Parliament decided that the Cornwall Park land should be valued for rating purposes at its "restricted value", this valuation of the park having regard to its income as grazing land. By this time the capital value of the Park's land exceeded £200,000.

In 1952 following the death of his only daughter Campbell's remaining estate, then valued at £400,000, passed under the control of the Cornwall Park Trustees and the income is allocated according to Campbell's wishes to a wide range of purposes.

Income received by the trustees from the trust's property is exempt from Income Tax.

No more riding or golf

Soon after the beginning of World War II riding and golf were banned. Horses for the damage to lawns, although tracks were provided, and golf for the annoyance and danger to sheep grazing in the park. Subsequently it was decided that golf was not a use available to the people generally and did not comply with the trust deed and the Auckland Golf Club's and Maungakiekie Golf Club's privileges were ended. In any case the trust deed required construction of "Grand Avenue" through the land at present used for golf.

From 1942 to 1945 the park was occupied by the nation's defence forces as a site of temporary barracks and a temporary hospital was built for the United States Army in the eastern area of Cornwall Park. Initially for 1050 patients and their 715 attendants — the U.S. 39th General Hospital — it was very shortly doubled in capacity to 2,000 beds. There were 122 separate buildings with a floor area of 8 acres, built in just over 6 weeks during a wet winter on 34 acres (14 hectares) of the park.

In 1944 the Government proposed to compulsorily acquire a portion of the land to build a home for blinded ex-servicemen. It was protested that in June 1942 an undertaking had been given that the area would not be used for other than war purposes but to no avail whatsoever. The hospital buildings became Cornwall Hospital and included maternity facilities, National Women's Hospital, and a geriatric hospital. All buildings on the site were demolished in 1975. The hospital for blinded servicemen remains in the adjoining Park Maungakiekie/One Tree Hill Domain, and is known as Sorrento in the Park, an events venue. 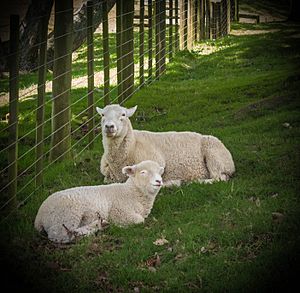 On top of admiring scenery, drinking tea while the Band plays on its rotunda, picnicking, birdwatching, walking, jogging, bicycling, keeping the dog secure on its leash and admiring the ewes and their lambs, provisions for formalised activities include:

All content from Kiddle encyclopedia articles (including the article images and facts) can be freely used under Attribution-ShareAlike license, unless stated otherwise. Cite this article:
Cornwall Park, Auckland Facts for Kids. Kiddle Encyclopedia.