Eden Terrace is an inner city suburb of Auckland, located 2 km south of the Auckland CBD, in the North Island of New Zealand. Eden Terrace is one of Auckland’s oldest suburbs, and also one of the smallest, at just 47 hectares (ha) is second only to Newton (43.2 ha).

Eden Terrace is under the local governance of the Auckland Council. According to the 2006 census, Eden Terrace has a population of 1,965. 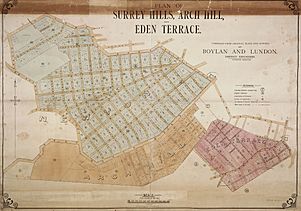 David Burn (c.1799 – 1875) was the first landowner in Eden Terrace to start subdividing farmland up for residential development. David (in 1863) was the first editor of The New Zealand Herald (then called the Herald). He was also a playwright, journalist, and author of the first Australian drama to be performed on stage, The Bushrangers.

Scottish-born David immigrated to Auckland in 1847 and in 1849 bought land at the top of Symonds Street from William Smellie Graham, who in turn had bought the land from the Crown in December 1848. David built his house, Cotele, on this property. The house was located at the intersection of Symonds Street, Mount Eden Road and New North Road, enjoying views north to the harbor and west to the Waitakeres. He later moved to Emily Place and leased Cotele to various tenants.

In 1861 then again in 1863, David subdivided the land around Cotele into hundreds of small building allotments and sold them off at a considerable profit. New roads appeared as the land was subdivided; David was always "warmly attached to the navy and nautical matters" which could explain his choice of road names: Basque; Dundonald; and Exmouth – all associated with famous sea battles.

David Burn died in 1875, "in comfortable circumstances" thanks to selling the Cotele allotments at such high prices.

The early Victorian house built by Burns, Cotele, was replaced around the year 1900 by a two storied Edwardian Arts & Crafts house. In the 1930s one storied shops were built on the frontyard of the house. The wooden house was just visible above the shops from Symonds Street until it burnt down in 1995. In the 2000s the site was completely cleared of buildings. It was proposed that this was to be the entry to the new Underground Railway Station but in 2014 it was announced that the Newton Station was to be dropped from the Central Rail Link (CRL).

Eden Terrace formed its own district in 1875. 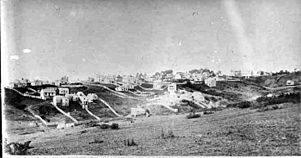 Looking east from Arch Hill towards Eden Terrace, circa 1860–1880

All content from Kiddle encyclopedia articles (including the article images and facts) can be freely used under Attribution-ShareAlike license, unless stated otherwise. Cite this article:
Eden Terrace Facts for Kids. Kiddle Encyclopedia.