Newton is a small suburb of Auckland, New Zealand, under the local governance of the Auckland Council. It had a population of 1,641 in the 2013 census.

Symonds Street is named after Captain William Cornwallis Symonds (1810–41), an officer of the 96th Regiment of Foot of the British Army. He came to New Zealand in the early 1830s as agent of the Waitemata and Manukau Land Company and was instrumental in the founding of Auckland and the signing of the Treaty of Waitangi. He was one of Governor William Hobson's closest and most effective officials and was one of the first six Police Magistrates in New Zealand as well as Chief Magistrate of Auckland and Deputy Surveyor of New Zealand. During 1841 Symonds accompanied the naturalist Ernst Dieffenbach in his survey of the North Island. Capt Symonds died on 23 November 1841 in a boating accident on the Manukau Harbour. Following his death his brother John Jermyn Symonds continued to live in the colony; Symonds Street in Onehunga is named after John Jermyn Symonds.

Karangahape Road takes its name from the ridge it stands on - known in pre-European times as Te Ara o Karangahape - The Path of Karangahape - the name possibly indicates the route that was taken to visit an eminent Chief (or Mythical entity) called Hape who lived on the shores of the Manukau Harbour to the south west. From about 1900 to the early 1960s K' Road was Auckland's busiest shopping street with a large range of clothing and shoe shops along with several department stores. During the middle of the 20th century Karangahape Road (and to a lesser extent the adjacent Upper Symonds Street shops) was a destination shopping centre, especially busy on late nights due to the presence of cinemas.

In the 19th century Newton was the name given to a slightly different area - stretching from what is now called Surrey Crescent to Eden Terrace. References to Newton can therefore describe different areas at different times in the past; the Newton Branch of the ASB for example was built in the 1880s at the Karangahape Road end of Ponsonby Road.

The 1861 Newton Electoral district, represented by one MP, was bounded to the north by the harbour and Auckland East and West Districts, to the east by Parnell District, to the south by Cabbage Tree Rd and Karangahape Rd and to the west by Meols and Scoria Creeks.[1]

Following the death of Sir George Grey in 1898 the northwestern portion was renamed Grey Lynn, leaving Newton as the area between Karangahape Road and Eden Terrace - since the creation of the Motorway in the 1960s many people don't think of Karangahape Road as being part of Newton, reserving that name for the area around Upper Symonds Street. The Newton Post Office has always been on Karangahape Road; the first one from 1878 was on the corner of Cobden Street (demolished 1970)its replacement (built 1973) is located on Karangahape Road at the corner of East Street. From the late Victorian period until 2011, there was a separate Post Office serving Newton and Eden Terrace, known as Upper Symonds Street.

Historically, the suburb had a fairly dubious reputation. A 1920s newspaper described it as a "haunt of many of Auckland's best-known crooks".

This reputation was one of the reasons the Ponsonby Police Barracks were built on Ponsonby Road near the intersection with Karangahape and Newton Roads. This was the second most important Police facility in Auckland and was positioned there to enable a mass of Police to be on hand to quell anything in Freemans Bay or Newton Gully. Virtually across the road from the Police Barracks was the Star Hotel (corner of Karangahape and Newton Roads) this was a centre of Union Activity and probable Sedition. Michael Joseph Savage gave some of his early speeches at the Star Hotel.

As Newton Gully was viewed as the home of many criminals (Dennis Gunn being just one example) its combination of substandard housing, crime, and Trade Union activity was probably a contributing factor in its eventual destruction by City Planners who used the Motorway as a convenient tool to rid the city of what they considered a problem area. This was in accord with the example set by Robert Moses in New York City and emulated by similar Town Planners around the world.

Before the 1870s there were several brick works in Newton Gully including some which manufactured tiles, pipes and even 'Art Pottery'. These companies were progressively relocated to New Lynn; many 19th-century bricks found in central Auckland bear the imprint "Newton". From the 1890s onwards Newton was the location of many small scale industries: shirt, clothing and boot factories, upholstery, rattan furniture & basket manufacturing etc. It was also the location of several specialist metal works including brass foundries and bicycle importers & manufacturers.

Situated between the busy retail areas of Karangahape Road and Symonds Street (which were, and still are major routes), Newton was a fairly densely populated suburb, mainly of a working class nature with many boarding houses. Until the construction of the motorway system in the 1960s, the gully area was the location of several primary and intermediate level schools and about six churches.

In the 1880s there was concern that the domestic water supplies for the area were being contaminated by the adjacent Symonds Street Cemetery; The Newton gully was created by a stream which drains into the Western Springs area to the east. The possibility of Well water being contaminated by decomposing matter and embalming chemicals (arsenic in particular) was quite a worry, leading to the eventual closure of the cemetery and the opening of a new facility at Waikumete in West Auckland.

In the 1940s an area south of Newton Road underwent a process of slum clearance to alleviate the perceived problems of an area of densely packed sub-standard housing. Properties in Basque Street were purchased by the Auckland City Council. These were demolished and the land cleared resulting in the creation of Basque Park. The new park, which was completed around 1945, included a playground for children, ironically this facility came at a time when much of the housing in the area was being replaced with light industrial businesses so the park has never seen much of the use it was intended to see.

As a slum (or 'Decadent Area' as they were termed in the 1930s by the City Council) Newton was seen as an area of biological and moral contamination. The routing of the Motorway system through the gully in the 1960s was seen as ideal; people would relocate to new areas to live healthier lives and Auckland's traffic problems would be alleviated. It wasn't foreseen that the motorways would have a devastating effect on retail trade; the Symonds Street Shopping area was badly hit. Previously the main centre for furniture shopping for the Auckland region, (Tylers, Grace Brothers, The Maple, Smith & Brown, and Jon Jensen) the Symonds Street retail trade went into a serious decline and virtually disappeared as a retail hub; its Business Association collapsed in 1976 and has only recently (2012) been revived.

After the motorway was cut through, Newton became even less of a desirable place to live with Symonds Street and Newton Road becoming almost motorway onramps. Much of the remaining housing stock in Newton was utilised for light industrial use and in many cases demolished and rebuilt as factories and warehouses. Since the 1990s there has been a reverse trend of rebuilding or converting industrial buildings for residential use including some large apartment block complexes.

Upper Symonds Street is the location of three large churches: St Benedicts Roman Catholic Church (the 2nd most important catholic Church in Auckland), The Church of the Holy Sepulchre (2nd most important Anglican Church in Auckland) and St David's Presbyterian Church. In the 20th century the Upper Symonds Street Shops were the location of several large Furniture stores; Grace Brothers, The Maple, Smith & Brown, and Jon Jensen. Also located in the area were several entertainment venues; The Orange Coronation Hall, St Benedict's Hall, a Roller Skating Rink as well as the first purpose built cinema (the 1911 Lyric; demolished in the 1990s) and one of Auckland most famous restaurant's in the 1960s, the El Matador. 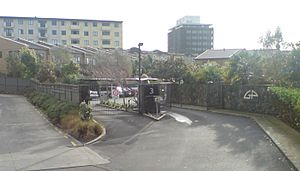 Townhouses (such as this gated community) and apartment blocks have replaced a big part of the older fabric of the eastern part of the suburb.

In the mid 1990s most of the eastern portion of the street was demolished, partially to widen the roadway. This took with it several buildings of importance including the Lyric Theatre of 1911, Tylers, the El Matador, the Astor Hotel and the BNZ (an Art Deco structure with Maori motifs). Initially the Skycity Casino and Sky Tower were intended to occupy the resulting vacant block of land but for various reasons (including sightline issues involving the profile of Mt Eden) that development was relocated away from this area. The 'missing' part of the street has subsequently been rebuilt with buildings which are very poor replacements of the lost structures.

All content from Kiddle encyclopedia articles (including the article images and facts) can be freely used under Attribution-ShareAlike license, unless stated otherwise. Cite this article:
Newton, New Zealand Facts for Kids. Kiddle Encyclopedia.